While writing yesterday’s post, I remembered something. I remembered that waaaaay back in November, my daughter, Lauren wrote a play that I failed to share with you! November and December were very busy months for us, as they are for most people. Not only were we knee deep in homeschooling and holiday preparation, but we also spent about two weeks passing a virus back and forth.

Lauren has been studying ancient history this year – ancient Egypt, Greece, Rome and the mythical gods and goddesses. One of her projects was to put on a play about Moses. In the play, she gave a bit of Moses’ back story – the baby in the bulrushes- then moved on to when he was asking Pharaoh to let the children of Israel go back to the Promised Land. She involved everyone in the family in her play and even made costumes. The cast did a lot of giggling, but I got the point. 😉

Here’s the cast (and crew): Lauren as Pharaoh (holding the doll, which was baby Moses); Mitchell as Moses, Leslie and Laci are guards. I just love the beard Lauren made for Mitchell. She cut out the shape of a beard on paper, then glued polyester fiber-fill (stuffing for pillows) on to the paper! It was attached with tape! The other costumes were made with bathrobes, sheets and towels.

Pharaoh is looking too nice if you ask me. 😉

Moses wants his people to be free! 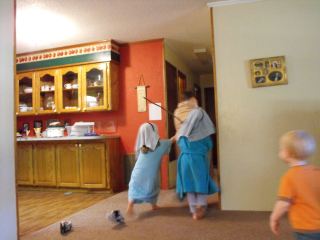 But he was told “NO!” and the guards carried him away.

Our audience is a little worried.

But fortunately for Moses, the guards are really kind-hearted little girls.
I think this is one of the best things about homeschooling: making up our own fun as we go along.