If a dog is man’s best friend, then we had the best of the best. Our sweet dog, Libby, died this morning. I’m not really a “dog” person, but my heart is hurt by this loss. I grew up in the city and my parents were not pet people, so I have had little experience with animals. On May 8, 2001, Terry was working at Panther Valley Ranch in Hot Springs, Arkansas. A little dog ran up to him, a dog that had just been dropped off by its owners to roam till it died. Terry took pity on her and brought her home.

We needed a name for her, one that our almost-two-year-old, Lauren, could pronounce. I liked “Lady”, but that was so common. Somehow, we settled on “Libby”. Lauren could say it. Libby would run along beside Lauren while she played and lick at her legs now and then. She would let Lauren pet her and comb her and do just about anything to her. She never, ever barked at her. She did this same thing with the other four children to come. She seemed to know that little people were good people. She would, however, bark at strangers and other animals loud and clear! I always knew when the mailman was at the house, or when someone was riding by on a bike.

She was never used as a hunting dog, but she killed more squirrels than I can count. She killed a possum once…well, we thought she killed it. Turns out, it was playing “possum”! She has gotten in battles with snakes and even a skunk. She won every time. She ran away more times than I can count, too. But she always found her way home.  Speaking of homes, Libby moved with us four times to four different states.

Her last few years were calmer. She didn’t bark anymore or chase squirrels. But we loved her and cared for her, dreading this day – the day when we would have to say goodbye.

Libby’s death is one more piece of my dad gone from this old world, too. Dad’s last act on earth was building Libby a doghouse. Libby lived with them when we lived in an apartment that would not allow pets. Dad loved her.

I know that dogs do not go to heaven. But if there are dogs in heaven, I’d like to think that they are all like Libby.

I’m going to go through my photos more thoroughly in the days to come for the kids, but here are two of my favorite photos of Libby, with our oldest and youngest:

Lauren, almost two years old, with Granddad and Libby. We had had Libby for about a month here. 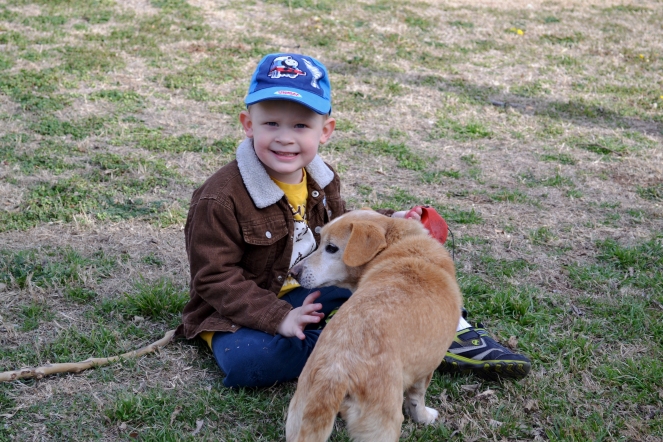 It with a grieving heart that we say goodbye to our good friend. She will be missed.