My mother is a very busy lady. She volunteers to clean a portion of the church building. She volunteers to teach Sunday School. As a retired elementary principal and Special Ed. teacher, she volunteers to teach education classes at the Bible college operated out of her church. She also goes soul winning and changes out several bulletin boards at church. Summer time is also busy with Bible conferences and other trips that she makes. Usually, we allow the kids to go visit her in “twos” each summer. Since we live far away now, going in groups wasn’t practical. I knew time was getting short to visit her because she would soon begin teaching in the college for the fall semester. When she called me in tears last Sunday (July 28) to tell me that my pastor’s mother-in-law, Mrs. Joann Goad, suddenly passed away, I was heartbroken! My pastor’s mother died from a long illness in June. I couldn’t believe the Lord was taking Mrs. Graham’s mother now, too! I decided we should just pack up and go. Terry had a lot of work to do, so he was unable to go. That’s right, it was just me, the road and five kids…

We had a very exciting week:

Monday, I arrived safely. It took us eight hours to make the trip. Six for driving, two for stops. It was my first time to travel alone with all the kids and go so far away. I hope it was the last time. 😉
Tuesday, we had to have a plumber out to repair a toilet. The kids painted a billion pictures and built with the blocks.
Wednesday, we ate lunch with my aunt and then went to Goodwill and Kohl’s. When we got back to mom’s, I locked my keys in the car and had to call a locksmith to have it opened. Right after that, a female cardinal got trapped in mom’s garage and we worked for several hours to free it. She finally flew out after much prayer and supplication. After we got to church, a terrible thunderstorm blew rain in the building and caused the power to go off and on about twelve times. The last time, it stayed off. The last quarter of the preaching was done in the dark with sporadic illumination from cell phones. Mine was one of them. We were able to get home safely and Mom still had power. I slept like a rock.
Thursday, we went to the library and the kids played at mom’s. That night I went to the visitation for Mrs. Goad.
Friday, we left about 8:00 AM to head home. I was crying very hard. The tears made it hard to see. I was merging onto I-30, or trying to, when I realized I was in the wrong lane. I had to stop. Several native Arkansans bid me goodbye with not-so-nice gestures. As they drove by, I hope they saw my tear-stained face and felt a little guilty at their reaction. But I doubt it. I’m sure those 14 seconds that I held them up probably cost them a job or something. We arrived back in Lawton at 3:30, which was an hour less than it took me to get to Benton. I guess I got better with practice. 😉

I only had my phone with me, so I could travel light, and I didn’t get a lot of photos. Here are a few of the best: 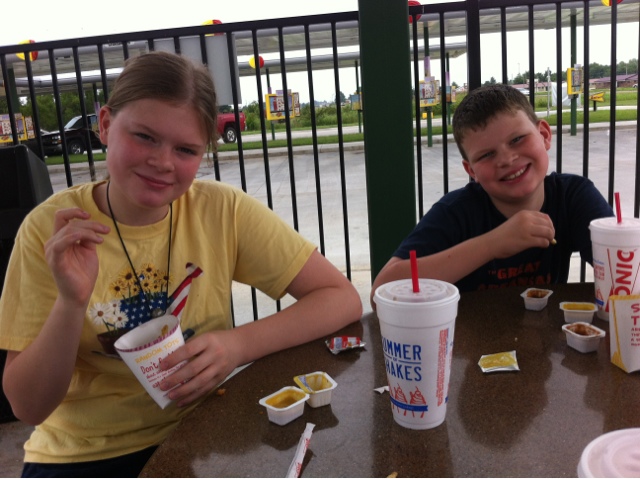 We stopped at a Sonic that had a playground somewhere in Oklahoma.

Almost there! I love this street! 🙂 Every grandchild loves this suit of armor! 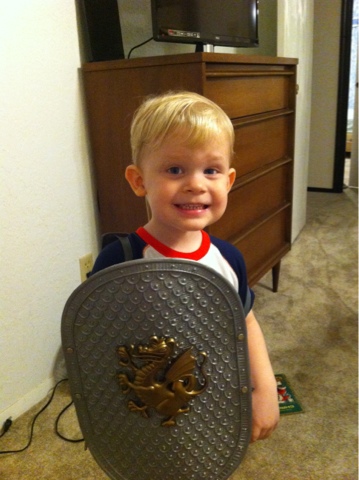 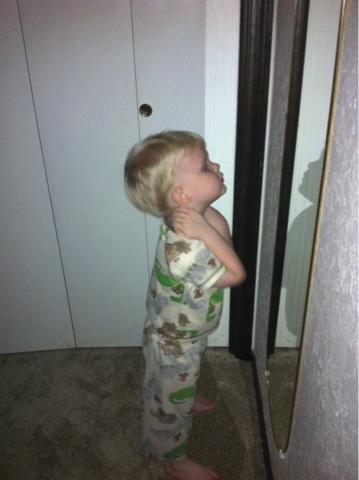 How do I look? 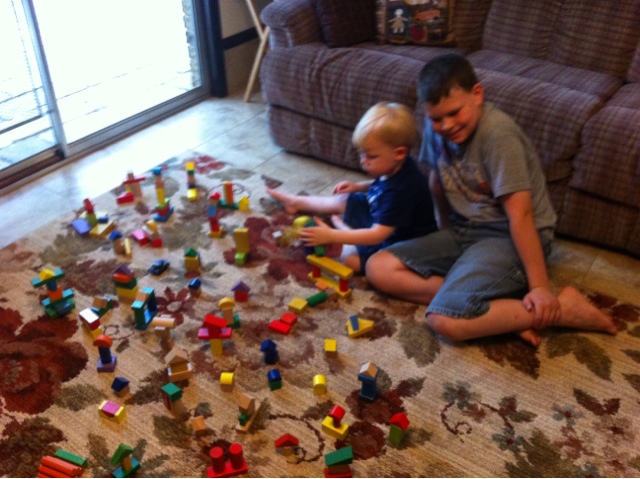 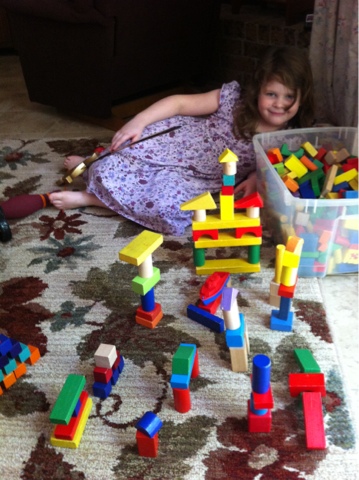 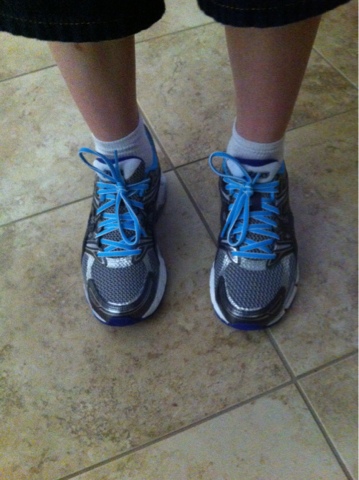 I used some Kohl’s gift cards to get Lauren some new sneakers  for volleyball. She will get to start playing with our homeschool group on August 19! 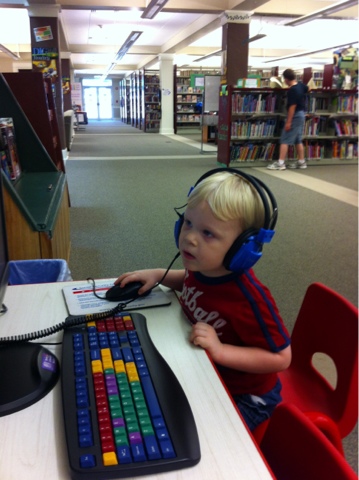 Whenever we’re visiting Nana, we have to use their great library! 🙂
Matthew is getting very good with a computer. He’s intent, anyway! 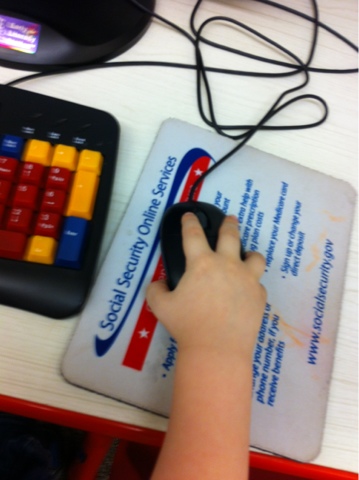 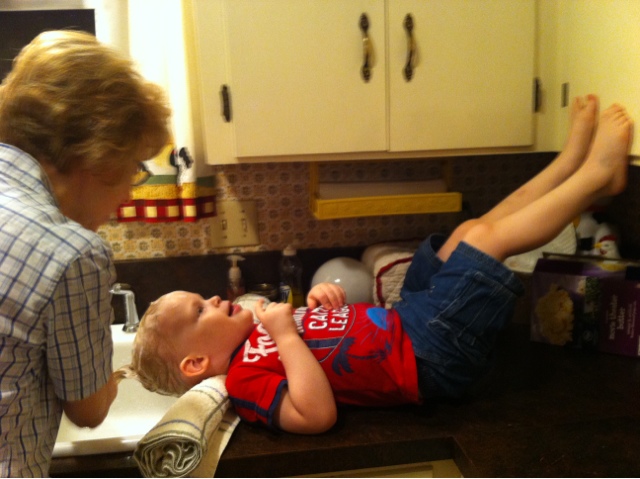 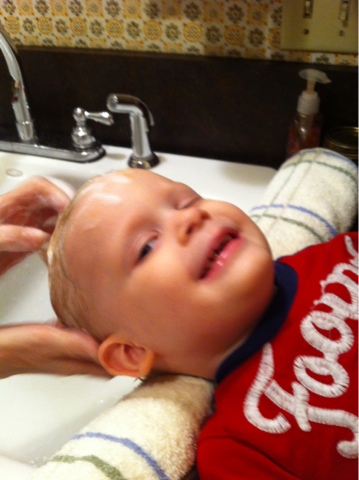 Ahhh! So relaxing after a hard day’s play! Thank you, Nana! He made himself a chair out of the pillow shams. 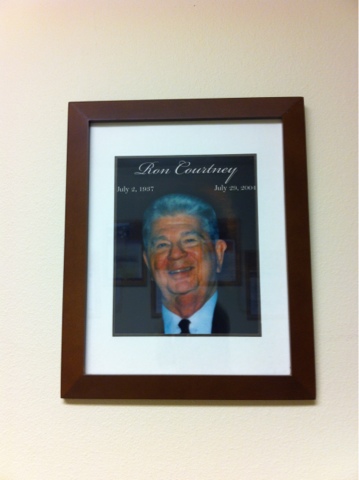 My church has this in the hallway to honor my dad, one of their most faithful men.

As I walked into the auditorium at the visitation for Mrs. Goad, I was overwhelmed with grief. I know I’ve been away for over a dozen years now, but, that doesn’t change my love for my church family. Mrs. Goad, like Mrs. Bobbie Graham, always took the time to speak to me when I would visit. In 2009, I wrote about my dad in a devotional booklet called The Baptist Bread. I was the first woman to write for them. Many people complained to the editor that a woman was published. But Mrs. Goad came to me smiling and said, “I liked what you wrote. It was a blessing.” I needed those words at that very moment. In fact, she always had something uplifting to say. She spoke at the Mother/Daughter banquet at Victory in 2012, and her testimony helped me to grow in faith. If the Lord could help her through hard times, He certainly would help me, too! Even though I didn’t know her as well as I wish I had, I do know that she touched the world around her for good; she influenced many for Christ.

We had a great time being with Nana, and we miss her so much. But it’s also good to be home!

5 thoughts on “A Visit with Nana”