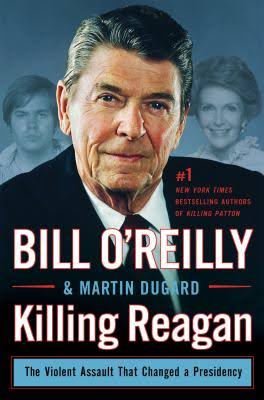 Killing Reagan by Bill O’Reilly and Martin Dugard is the latest book in the “Killing” series. This has been an interesting series. I thoroughly enjoyed Killing Lincoln and Killing Kennedy. My first thought upon seeing the title of this latest book was, “Reagan wasn’t killed.” But I was interested, so I read it.

I was cognizant of only a small portion of Reagan’s presidency…mostly the end. I remember that my parents liked him very much, and that some of our relatives didn’t. I remember sitting at McDonald’s with my dad when a lady approached him and said, “Sir, do you know who you look like?”

“Ronald Reagan.” He said as he removed the lid from his hotcakes.

And that, my friends, is what I know about Reagan.

This book was a nice summary of Reagan’s presidency, which I clearly needed. It didn’t just cover the assassination attempt by John Hinckley, Jr., but also his unhappy marriage to his first wife, Jane Wyman, Nancy Reagan’s penchant for astrology and her very controlling ways. It discussed Richard Nixon, Mikhail Gorbachev, Margaret Thatcher and myriad behind-the-scenes people about whom I previously knew nothing. I was saddened to read that Reagan was not a moral man, having had multiple relationships between his marriages. I was shocked to read that Reagan impregnated Nancy before marriage, and that his children were neglected by both sets of parents (Reagan and Wyman and Reagan and Davis). In fact, his children with Nancy are a bit wacko – another tidbit that surprised me. In light of the current political scenario, here are some interesting facts about Reagan:

And yet, many Christians claim that Reagan was “The best president of our lifetime” and, indeed, he made tough calls time and time again. He was a great leader and truly, the “Great Communicator”.

Perhaps a man can be a bad Christian, but a good President?

I enjoyed the book because I liked Ronald Reagan. He seemed to be a very fatherly-type president, and hey, my dad looked like him (somewhat). But this book was not nearly as thrilling as Killing Lincoln was. However, if you like history, the presidents, or Reagan in particular, I think you will enjoy reading Killing Reagan.