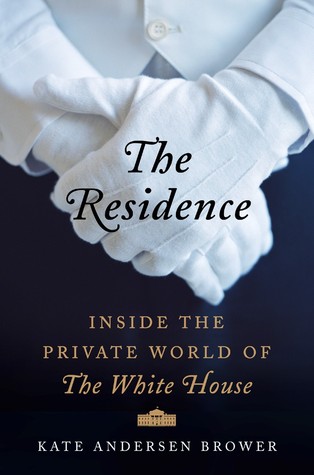 When we learned that we would be able to take a trip to D.C. and possibly see the White House, I happened to see a book on Twitter called The Residence by Kate Anderson Brower. I looked it up on our library’s website, and behold! They had a copy!

The Residence is a behind-the-scenes look at life upstairs at the White House. The author interviewed several butlers, ushers, maids, and chefs who lived and worked in the residence with the first family. This book mostly covers the administrations of the Bushes (both families), the Clintons, and the Obamas, with occasional mentions of the Reagans, and a few others. It gives the reader glimpses of the enormous responsibilities of managing the White House, like the cleaning, decorating, maintenance, and regular daily life. Just reading the part about how they move a new first family in and the former first family out is enthralling. This book also shares some of the personal moments of the first family, be it quiet moments, loud fighting, or quirky personal behavior, like LBJ’s fascination for strong water pressure in the shower.

The staff at the White House work hard to show love and protection to the first family, regardless of politics. They have no favorite family, they are simply part of the White House. Though certainly, some staff members are closer to some families than others. Chief Usher, J.B. West, was very close to Jackie Kennedy, but he also had a tight bond with Mrs. Eisenhower. Nancy Reagan rubbed some staff members the wrong way with her strong demands. Others, like Barbara Bush, loved and respected the staff so much, that the staff was saddened when the Bushes only had one term in the White House.

The most interesting stories of the book are the ones about the Clintons. The lack of love in their relationship was evident. While the staff tries to be invisible, they couldn’t help but hear their loud fights and see the times when they gave one another the silent treatment. During the Lewinsky scandal, Hillary had the chef prepare her favorite mocha cake more than once when the pressure was too much. Chelsea once called her secret service agents “pigs”, which I found to be the most disappointing part of the whole book.

A whole section is focused on Obama, but rather than cover his personal life or even his political one, it is focused on his race. The Obamas faced three times more death threats than any previous President, and they attribute it to his race. I can’t help but wonder if President Trump has beat that record? He certainly seems to be hated, and he is a white man! Hate is color blind, I guess. According to the staff of the residence, the Obamas did love one another deeply, and that is refreshing.

Visitors taking a tour of the White House visitors will never be able to tour the residence, but this book definitely will take you there.

2 thoughts on “My Book Bag: The Residence”