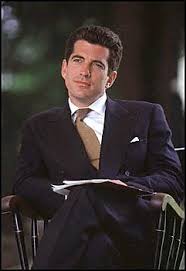 Today while eating lunch, I stumbled on a program about the death of John F. Kennedy, Jr. He was killed in a plane crash in 1999 at the age of 38. He was handsome, intelligent, and, due to his place in history, he was as close to an American prince that our country has known. His death was so shocking, and seemingly so preventable. The experts say that, had he switched on “auto pilot” on the small aircraft he was flying that hazy July evening, he would be alive today. What an incredibly sad ending!

This program showed a flash back interview he did with Katie Couric. You can view it HERE. At the 2:55 mark, you will hear him say this, regarding going into politics (or whatever interests him): “Listen, there’s a lot of time in life to do all sorts of things…”

He died two months later. At the time he said those words, he had, approximately, eight weeks to live; sixty brief days and nights. He never entered politics, or wrote that memoir. He never even made it to his cousin, Rory’s wedding.

It reminded me of the rich man in Luke 12:17-19 who said, “This will I do: I will pull down my barns, and build greater; and there will I bestow all my fruits and my goods. And I will say to my soul, Soul, thou hast much goods laid up for many years; take thine ease, eat, drink, and be merry.”

We have no guarantee of tomorrow. I’m not trying to be morbid. I hope each person who reads this will live a long and prosperous life. But, so what if you do? What about after death? Where will you go? Have you thought about eternity? John F. Kennedy, Jr. had wealth, promise, and prestige on earth. I hope he has it now. I hope he trusted in Christ alone for his salvation, and is now with the Lord.

If you’re hoping you’re good enough for heaven, let me tell you, you aren’t. Neither am I. No one is. We must put our faith – our trust – in Christ alone. Jesus lived a sinless life, died a sacrificial death and took the punishment of sinners upon Himself so that we may enjoy His presence in Heaven. Salvation isn’t dependent upon your behavior, your past, or your present good deeds – none of that matters. All that matters is this: do you trust in Christ alone?

If not, please do so today. And then use whatever time you have on Earth to glorify Him.