About two weeks ago, I let the little girls go out to play on the tarp – that’s a homemade slip’n’slide made from a big tarp and a water hose. A month or so ago, the kids found a golf club behind our church. Leslie had gotten that golf club to play with on the tarp. They had made a nice, big puddle with the hose. Leslie thought, “I bet if I swing this club down in that water it will make a big splash!” So, that’s what she did. She swung back and, whoops! Laci was there! She hit her on the outside of her right eye! It left a very big gash and she was bleeding profusely. I don’t handle blood well, especially my children’s! I called Terry and he was able to come home to see what needed to be done. Sure enough, he thought it needed stitches. I took her to the ER in town, and they felt it should be glued rather than stitched. I said okay to their plan, but I regret it now. It didn’t stay closed very well with the glue and now there is going to be a bigger scar visible than if it had been stitched. It was right in line with her eyebrow, so I’m hoping the hair will grow in and cover it.

Leslie felt terrible about this whole thing! She and Laci love each other so much, she sat and cried for a while, feeling terrible about it. I was happy that it wasn’t worse than it ended up being. The Lord truly watches over my family and I’m so very grateful!

The first day. They covered it with a bandage. You can see some bruising and swelling on her right eyelid. And, she’s so happy! {sarcasm} 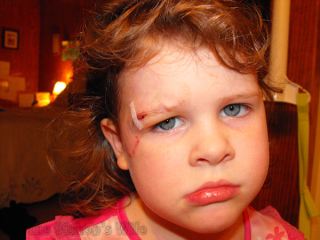 About two days later. I removed the bandage. They used glue, as well as steri-strips.

The lower redness (in the shape of the bandage) was not there at first. I think she had some kind of allergic reaction to the bandage they used. It cleared up in another two days.

It took almost two weeks for all the glue to come off! They used way too much. It also removed her eyebrow! You can see the scar clearly, but I’m hoping more time and the eyebrow growing back in will help it become less noticeable. At least she’s smiling a little here! 🙂
Speaking of eyes, and on a happier note, Lauren and Leslie got glasses!  Leslie didn’t pass the eye exam at her six year checkup, so our pediatrician recommended that we follow up with an eye doctor. I’ve been meaning to take Lauren for checkup for a while now and kept forgetting! I found out our insurance covers the exam and glasses, so that was a blessing! Lauren’s eyes were worse than Leslie’s, so she’s so glad to be able to see better! 🙂 When he put the right lenses on at the exam, and asked “Better or worse.” She said excitedly “OH! BETTER!” It was cute.