Last week, my girls had to say goodbye to a friend who is moving with her family to a new Army post. It was a sad night. 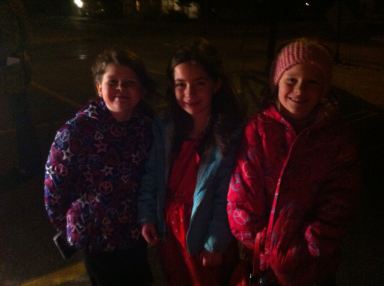 Because we were a little sad, and because we all lost an hour of sleep last weekend,  we decided that our little homeschool would begin our spring break this week! (The nice weather forecast helped a little, too!) We were blessed this year with only one sick day, so we’ve been right on track with our work. That meant we could take a week off and enjoy the sunshine! We begin our last nine weeks when we start up again, so the end is in sight. To start off our week, we visited Oklahoma City! I’ve been through there many times, but I’ve never stopped to do anything. Of course, we couldn’t do everything in a day, but we made a good start! We are going to plan another trip there for the summer!

We visited the zoo, which, like every zoo trip, was a bit of a disappointment. I either pick days when the weather is horrible, our allergies go nuts, or the animals are out of sight. Yesterday, the weather was great, but many animals were hidden away. The worst part was that suddenly, Mitchell’s allergies went crazy! He broke out in hives, his eyes started itching and watering and he couldn’t quit sneezing. We had almost seen everything in the two hours we were there, but as soon as we saw how miserable he was, we decided to leave. We missed the stingrays and a few other exhibits. We immediately bought some Benadryl for him and stopped for lunch. I didn’t want to bring my Nikon camera through the zoo, so I snapped some photos with my phone. 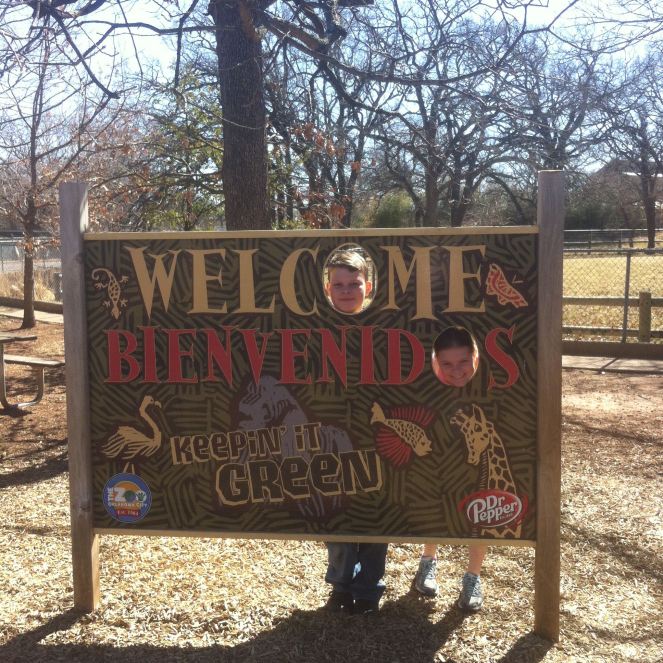 Here are the kids right after we went inside. 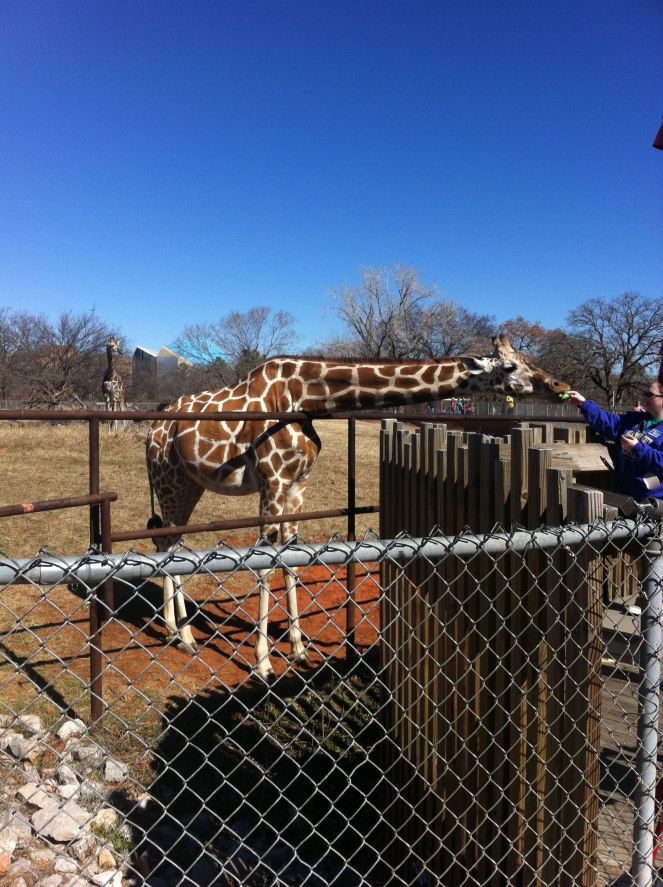 For three dollars a person, you could feed the giraffe. We enjoyed watching for free as this lady did it.

These are some doves resting.

I guess the Okapi was camera shy. 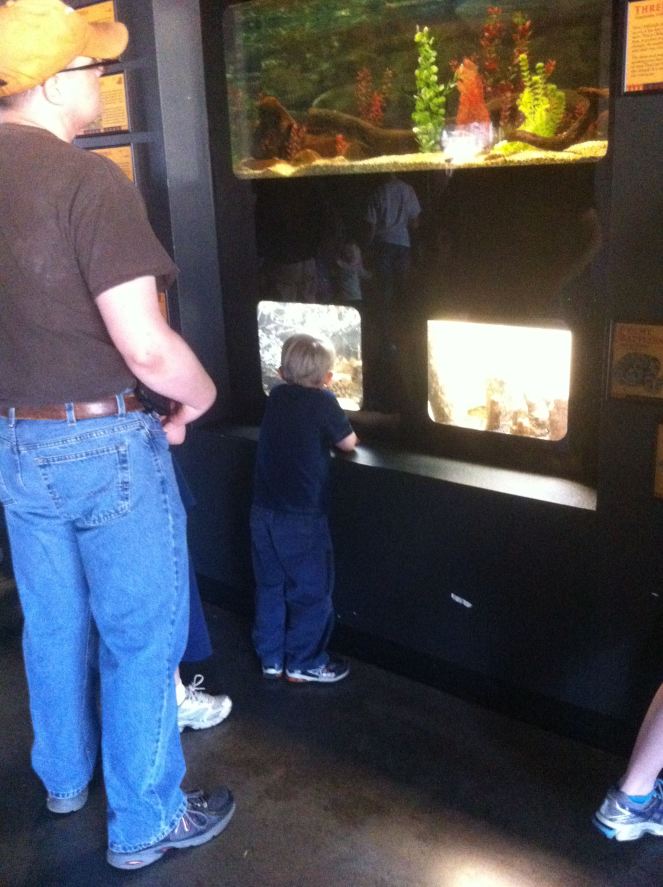 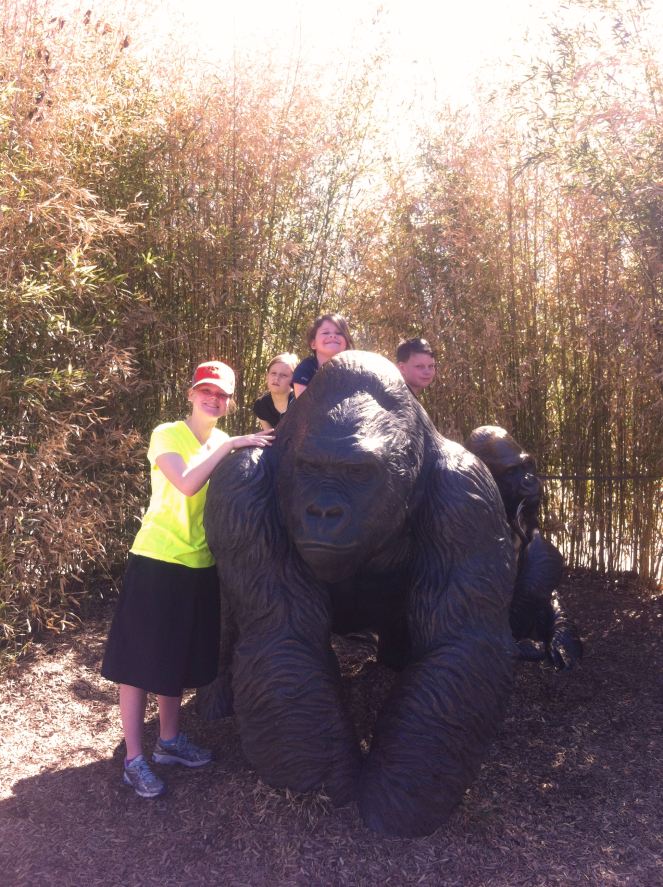 This photo is right after Mitch started getting sick. We quickly looked at the monkeys and the elephants before leaving.

I caught this ape yawning! Haha!

These grizzlies were behind glass.

The black bears started moving around just as we walked up.

He was big! Glad there was glass there!

This is all we saw of the elephants. We left after this stop not only because of Mitch, but the kids were growing tired of walking. 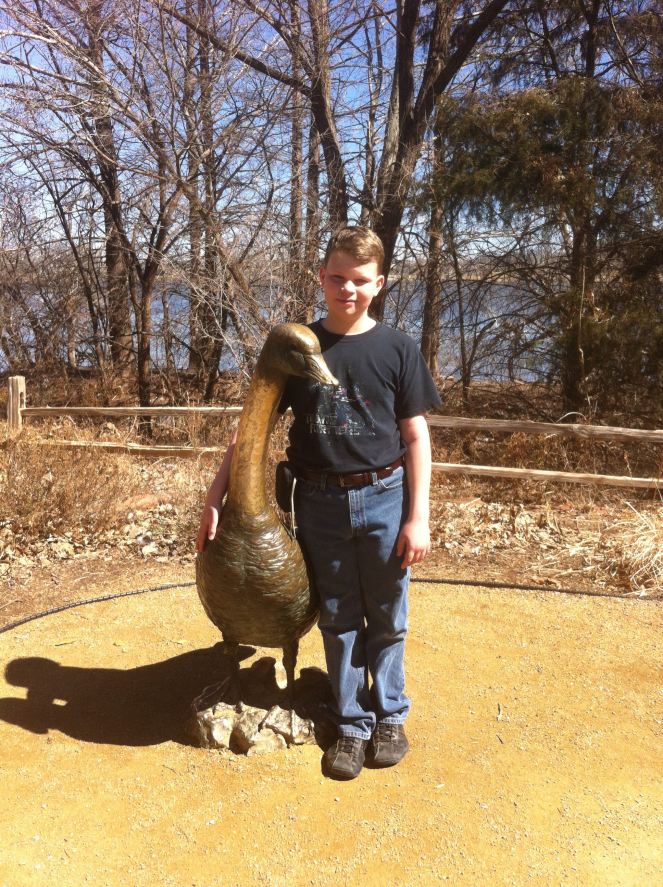 One last photo with Mitch on our way out. Poor guy! He was really feeling badly. As a fellow allergy sufferer, I feel his pain. I stay indoors most of the spring time because of asthma, hives, sneezing and watery eyes. Now that I look back at these photos, we saw several animals after all! Aside from these, we saw an alligator, a panther, some other birds and reptiles, and short glimpse of a lion. Not bad for two hours! 😉

Mitch was feeling a little better after lunch, so we stopped by the Oklahoma City National Memorial, the site of the bombing of the Alfred P. Murrah Federal Building on April 19, 1995. Had I known we were going to make this stop, I would have brought my Nikon! I missed getting some great shots at the memorial. I’ll just have to go back! 🙂 Here are the photos I captured with my phone.

The 9:03 gate and the reflection pool.

The rows of chairs to honor those who died. 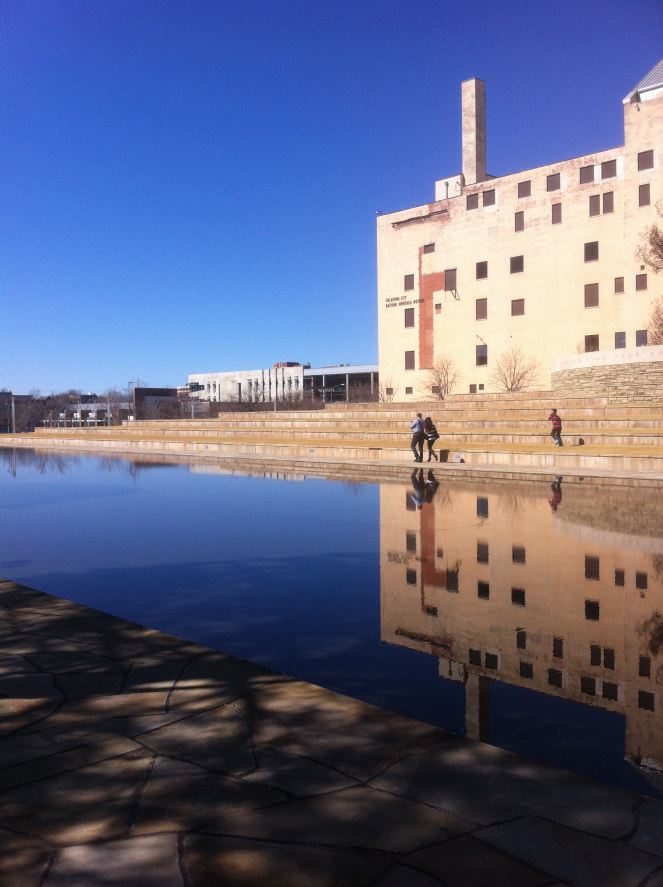 The reflection pool, which is about an inch deep.

This is the only surviving wall of the Murrah building. On the tablets are listed the names of the survivors. 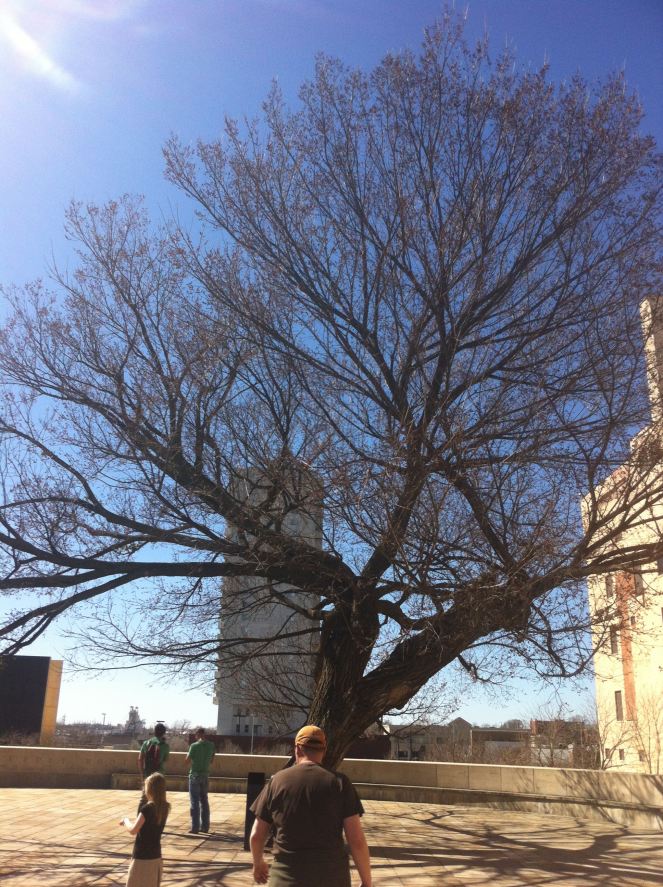 This is the “survivor tree”. It was damaged in the explosion, but has managed to thrive. A great symbol of hope in Christ! 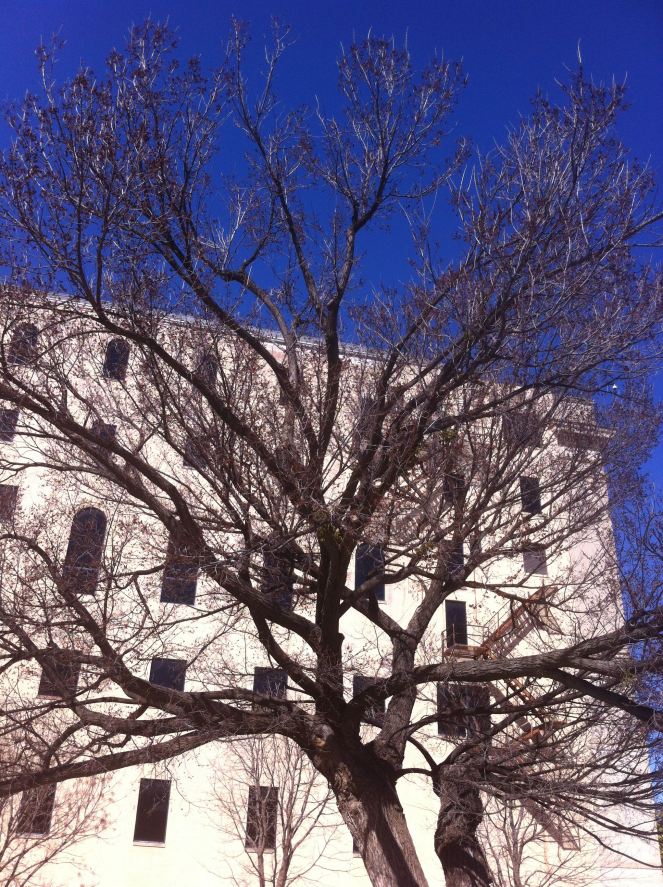 The tree was just starting to bud.

A view of the chairs from the survivor tree. The chairs are where the building once stood. 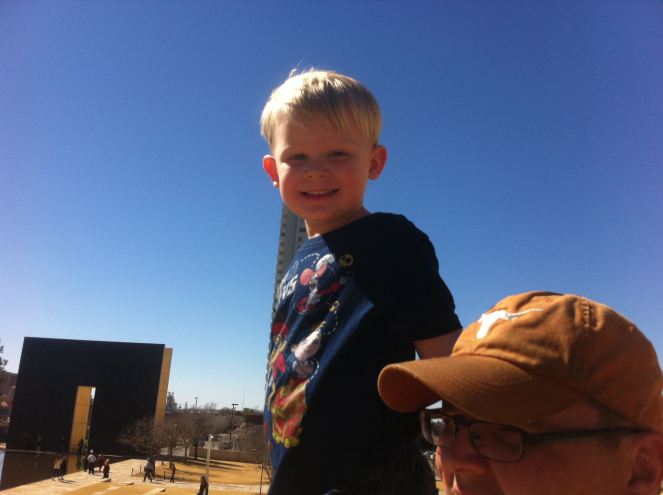 Here’s Matt against the blue sky beside the survivor tree.

I was 17 years old in 1995. I remember the pain in my chest as I watched the tragedy unfold on TV. Right as we crossed the street to the memorial, a speeding ambulance went by with siren blaring. I imagined how that sound was multiplied by 100 on  that horrific day. As we stepped through the gates of the memorial and I tried to explain the tragedy to my kids in hushed tones, I could feel the sadness of that place press in around me. The ground has been hallowed by the suffering of the wounded, the bravery of the rescuers and the tears of those missing loved ones. I felt a lump in my throat as I saw the tiny empty chairs, in honor of the children who died. As I stood with my own sweet children around me,  I thought of the parents who lost a child all too soon on that day. I was shocked to read that sixteen buildings had to be torn down due to the damage of the explosion! The hardest part of being there was trying to answer my innocent children’s question of why. “Why would he do this, Mom?” The only answer is sin. A depraved man lashing out in violence. A man lost, without God! Standing on that hallowed ground renewed a vision of a lost world in my mind. Oklahoma is part of the “Bible belt”. It was the only state in the last election in which every single county voted Republican! But conservative politics and a church on every corner doesn’t guarantee healthy, thriving families or protection from evil. There are many in our state who are still seeking an answer, and Christ is that answer.  HE must do a work in hearts, and we must introduce them to Him.

After we left the memorial, we drove past a church that Terry and I had heard about all our lives. In fact, when I graduated high school, my parents asked me if I had considered the Bible college at this church. Since it was in Oklahoma, I sort of wrinkled my nose at the idea and it ended there. (I had plans of going farther away from home than the state next door. Ironically, I ended up staying right where I was!)  I was a little shocked at how small the buildings around this church were! My home church has a larger facility! It was very interesting.

Before heading home, we stopped by Mardel Bookstore (MY FAVORITE!!) and picked up some things for home and school.

Today, we have done some cleaning around the house and the kids are enjoying playing outside some. It’s nice to have a change of pace to our routine. [read: rut!] I hope to do some blogging this week, since last week I didn’t do much due to our busy schedules.

This much I know: you don’t have to go far from home to be moved; to be reminded that we have just one life to live. Let’s live it intentionally for Christ!

One thought on “Oklahoma City”