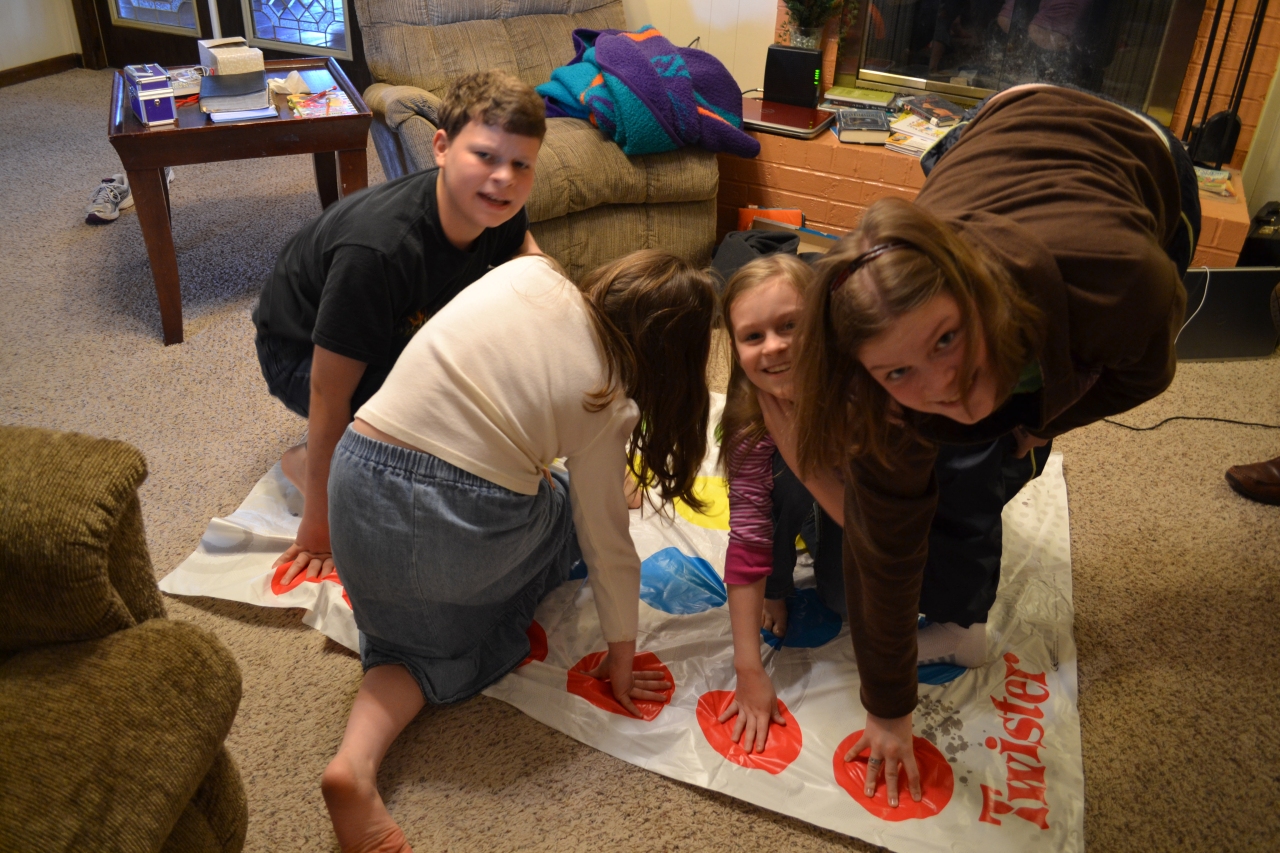 We usually do some traveling on this holiday, but this year, we just stayed home. I missed seeing my family very much, but there were good things about staying home. We made some great memories. I am hoping that I can “have my cake and eat it too” by seeing my family in the coming year. Here are a few photos from our day. I hope your Thanksgiving was as special as ours was! 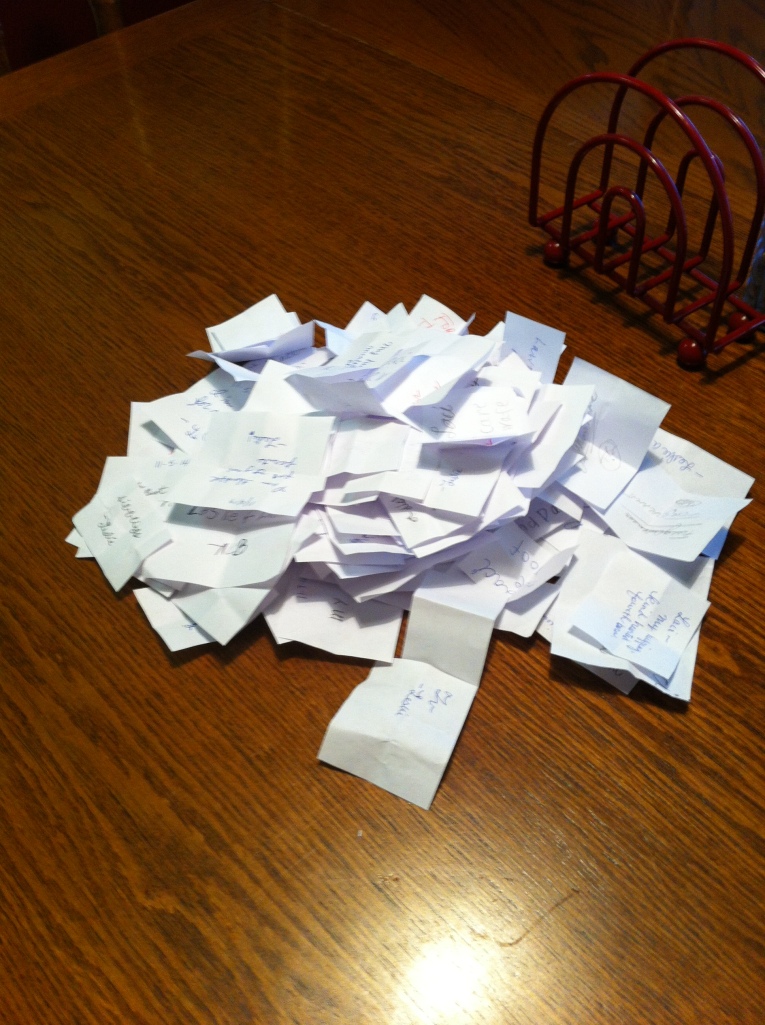 While the turkey and ham were cooking, we pulled out our “thankful box”. We’ve all been writing down our blessings for the month of November, folding them and putting them in a box to read on Thanksgiving Day. I thought the funniest one was by Mitchell: he was thankful for Bing Crosby and Bob Hope! You can tell we watch old movies and TV around here. Each child was thankful for their parents and siblings, which touched my heart. I thought the sweetest one was by Terry: he said he was thankful for a happy home. That one really made me smile. 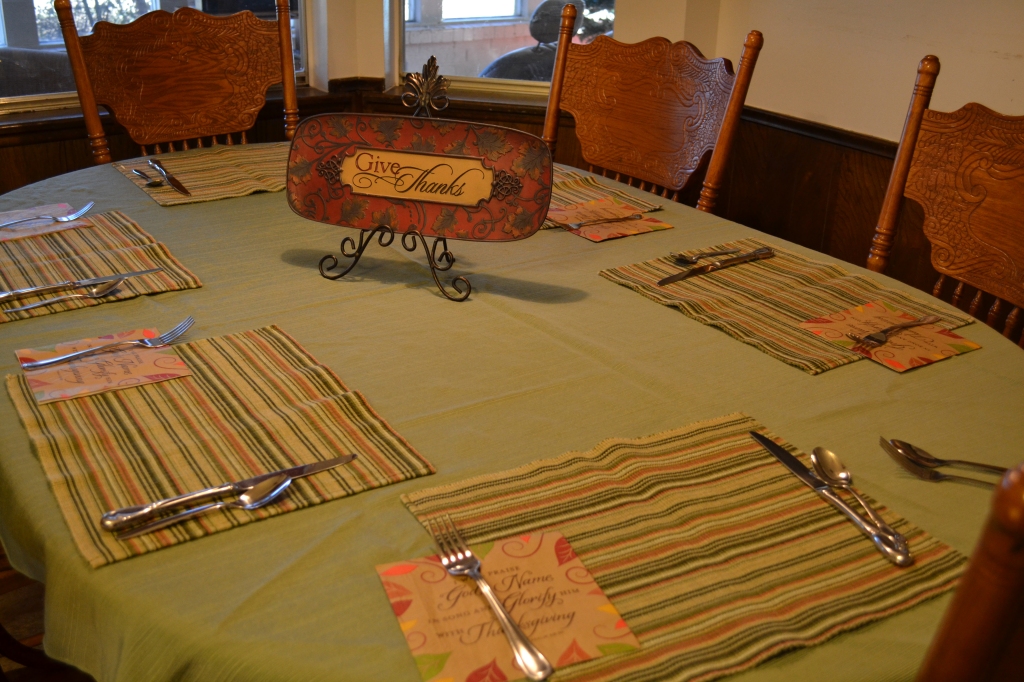 I just love my new centerpiece! I got it at Hobby Lobby several weeks ago, using my 40% off coupon.

I got the napkins at Hobby Lobby, too, on the clearance aisle. I liked the verse that was on them. All holidays should be celebrated in honor of the Savior, the Giver of all things to celebrate! 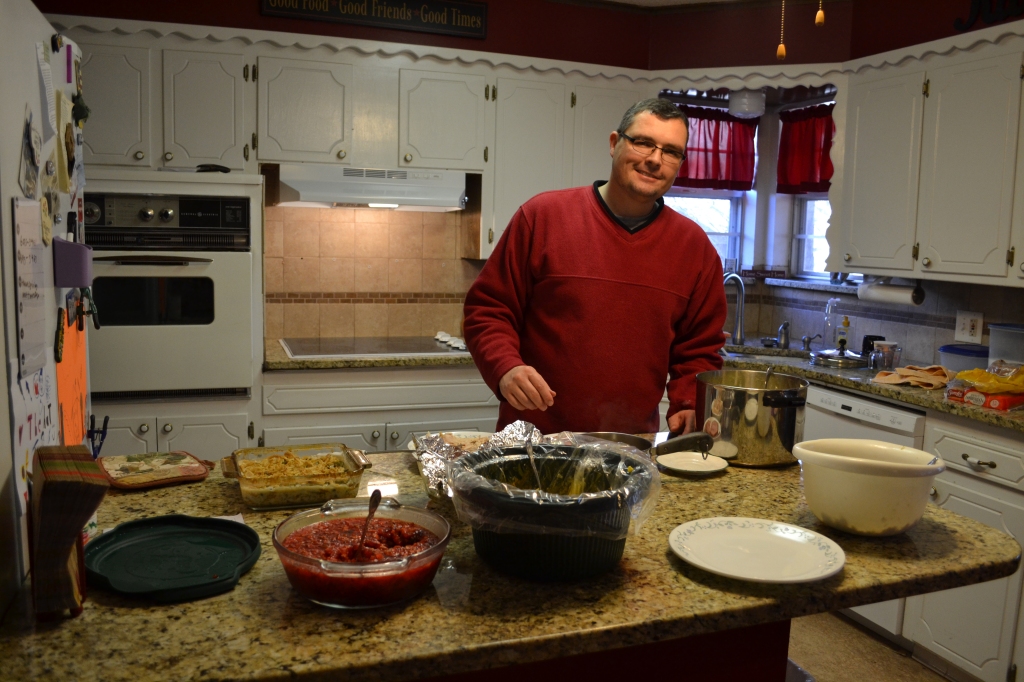 We were blessed with more food than we could eat at one sitting! 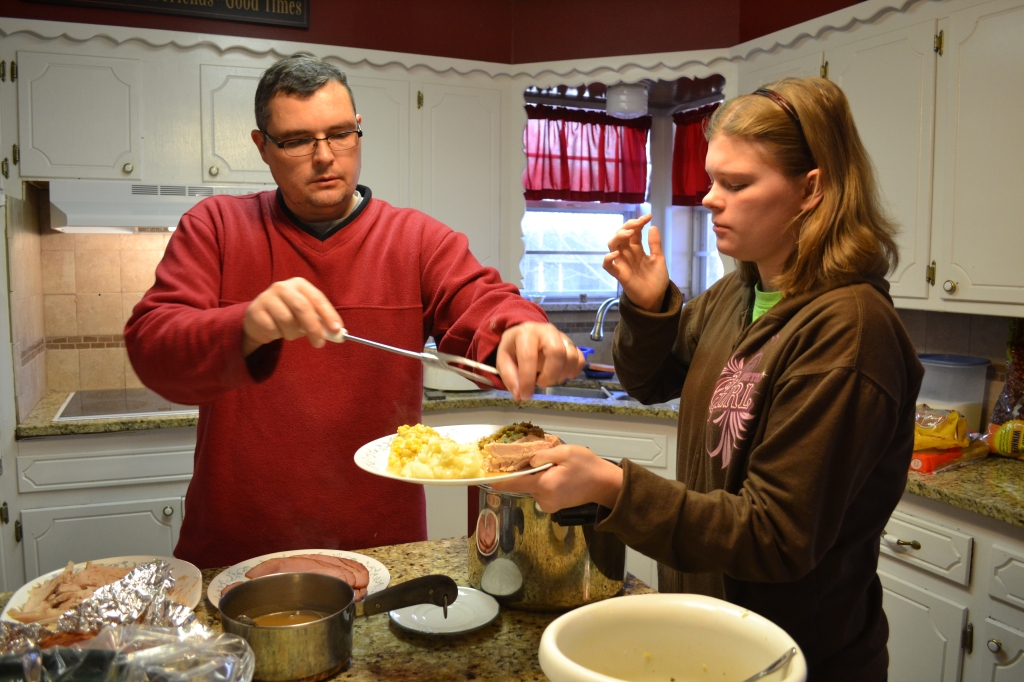 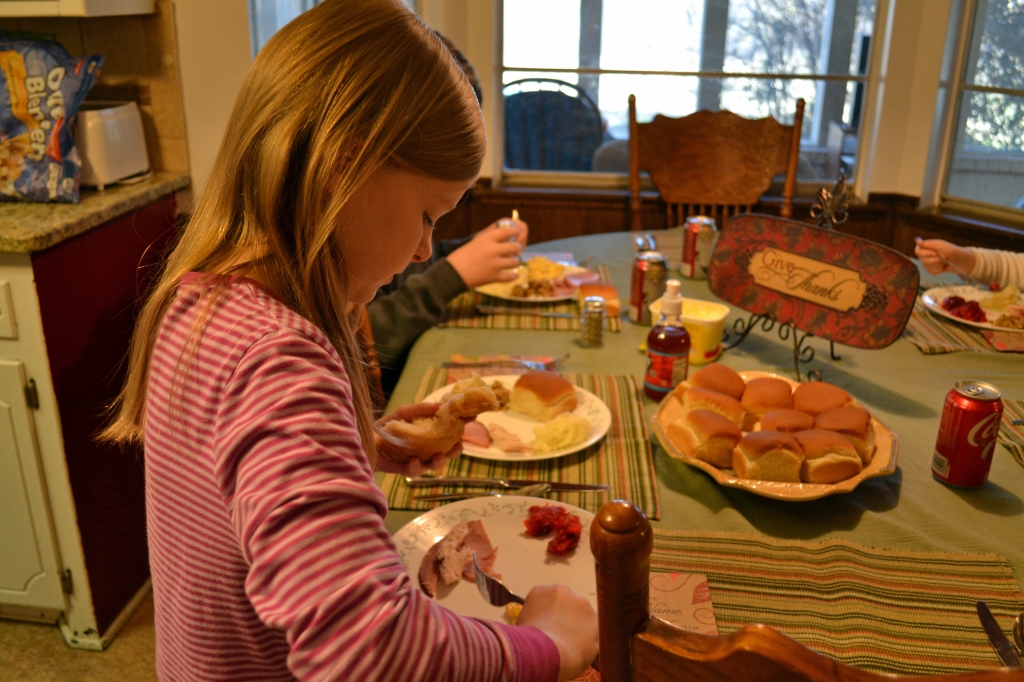 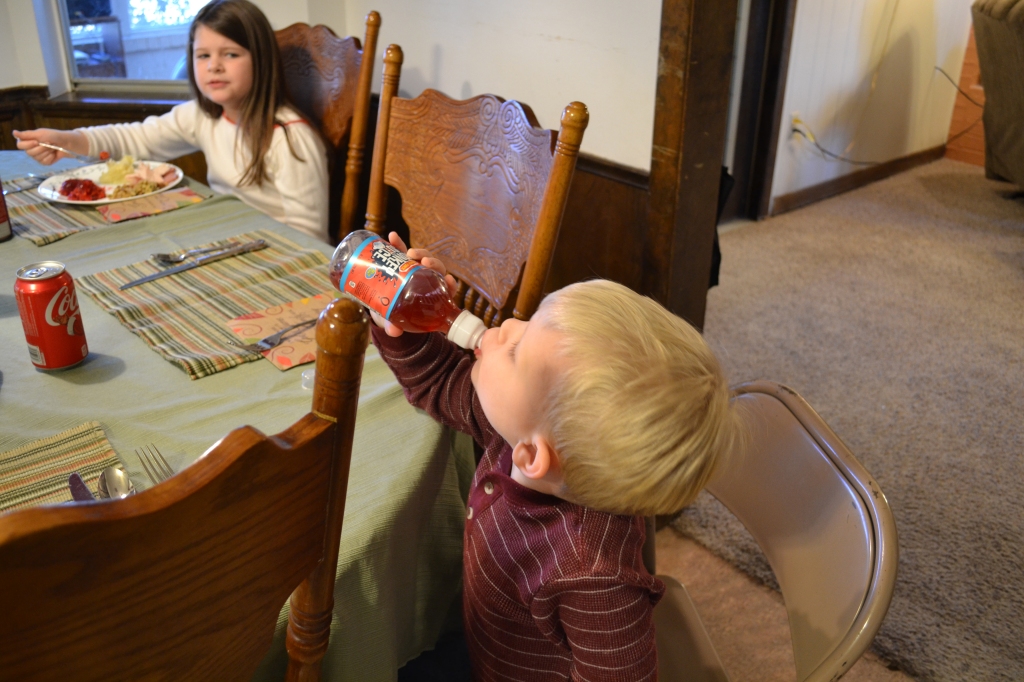 Terry bought the kids special drinks for the meal. Matthew got “Monkey Juice” (whatever that is!) He seemed to like it! 🙂 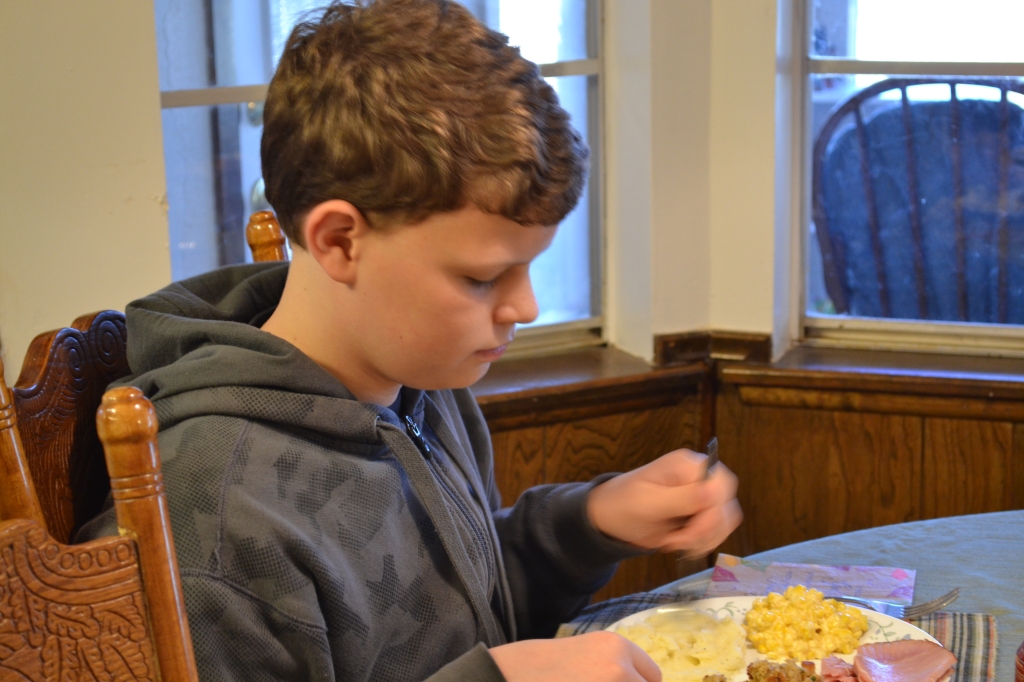 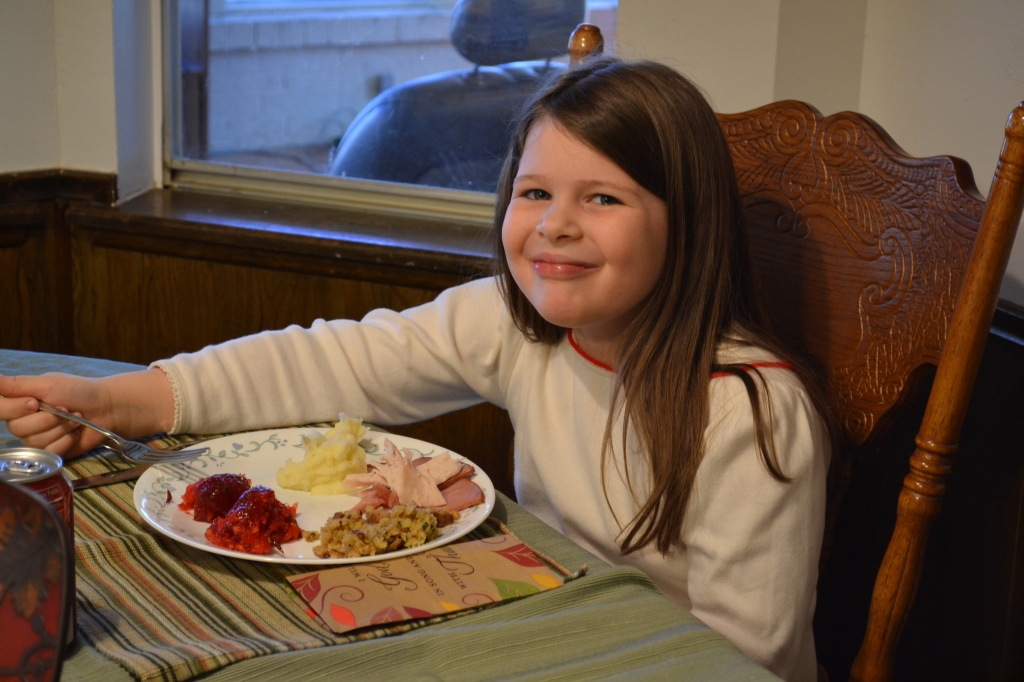 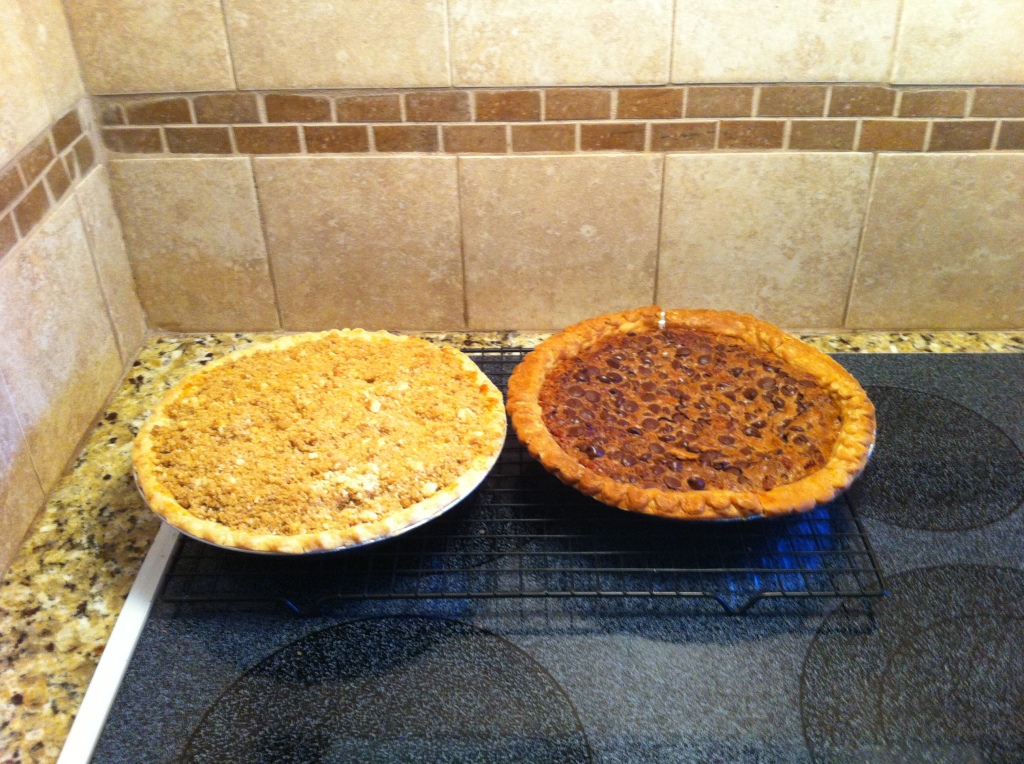 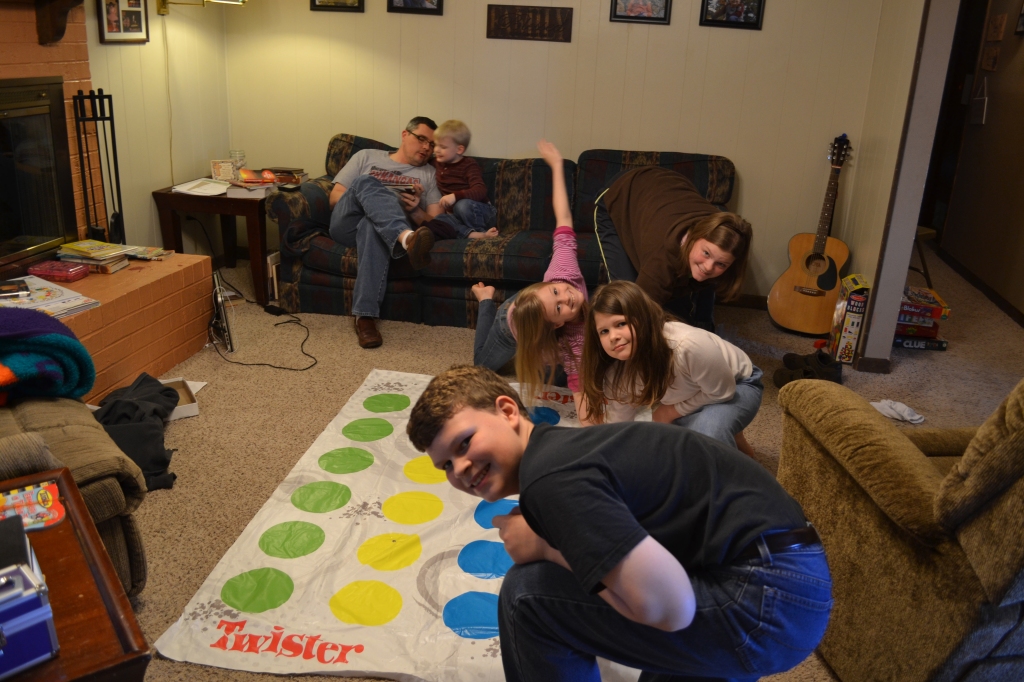 After lunch, the kids played several rounds of Twister. 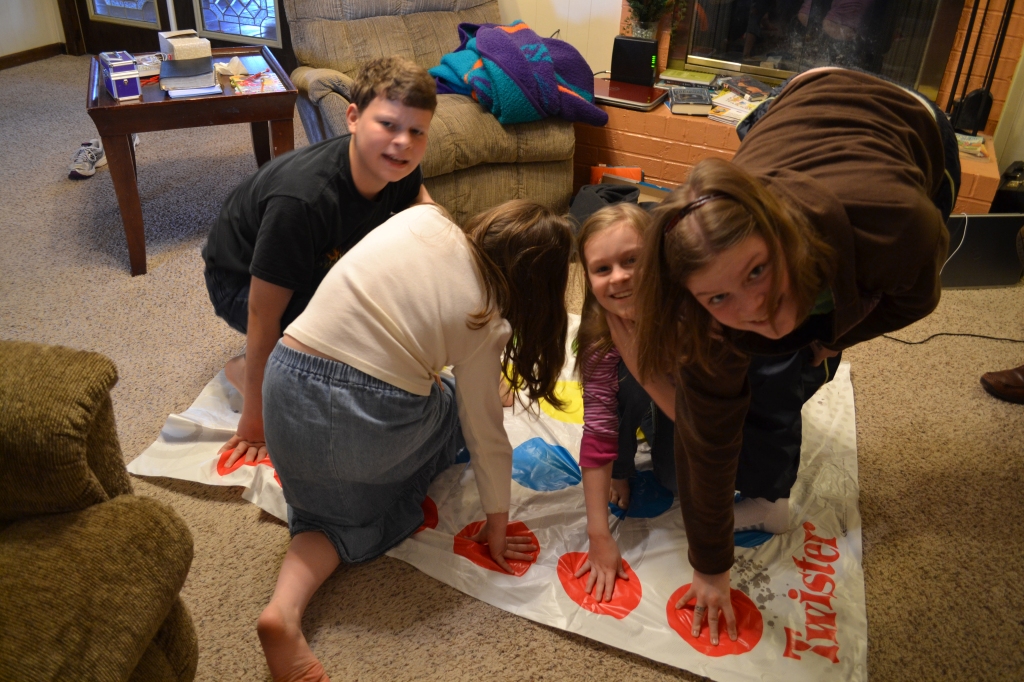 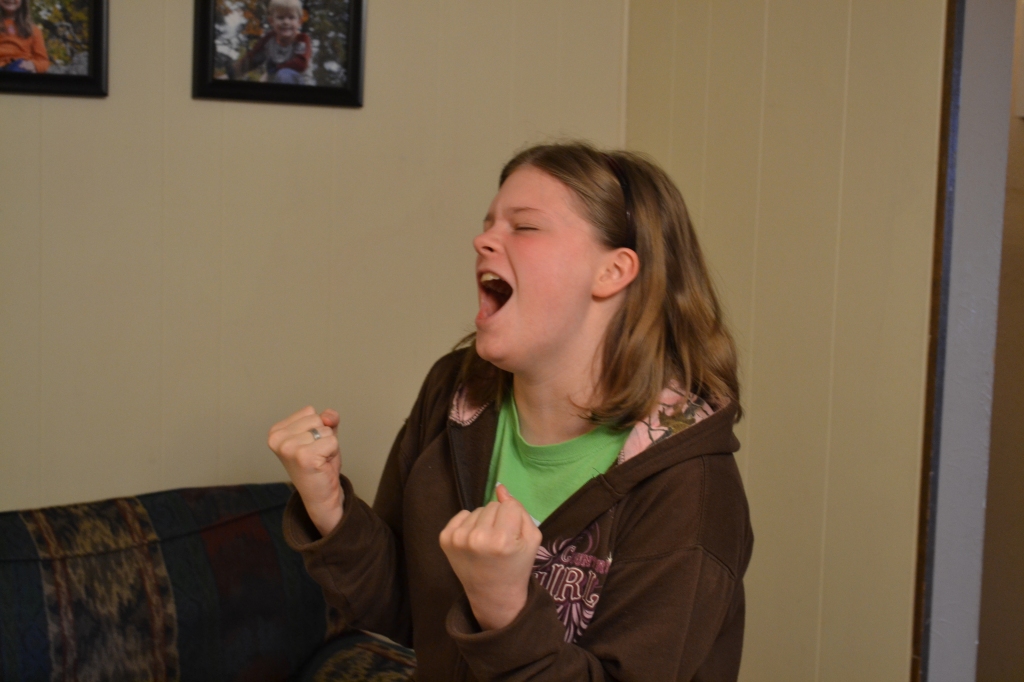 Lauren won one game. This is her “I’m-pretending-to-be-excited-that-I-won-this-game” face.

This is a short video of Matthew during the game. He was too little to play, so he got to call out the commands (with Dad’s help) for the others to follow. He took on his role with vigor.

After Twister, we all played Guesstures. It’s one of our family’s favorite games. 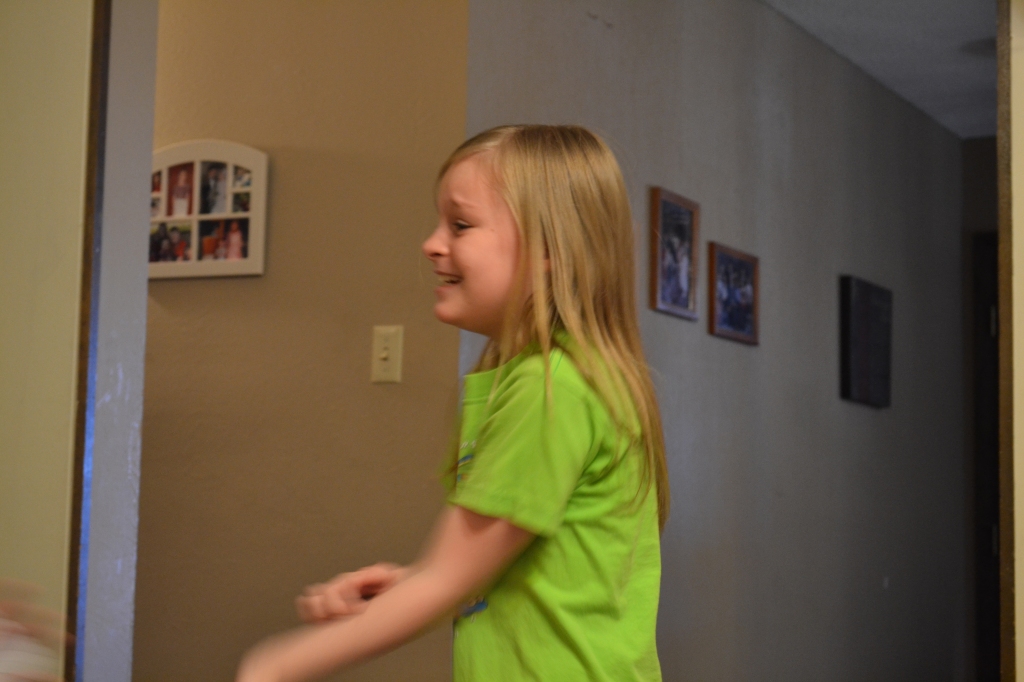 Leslie particularly enjoyed it. Here she is doing “itching”. 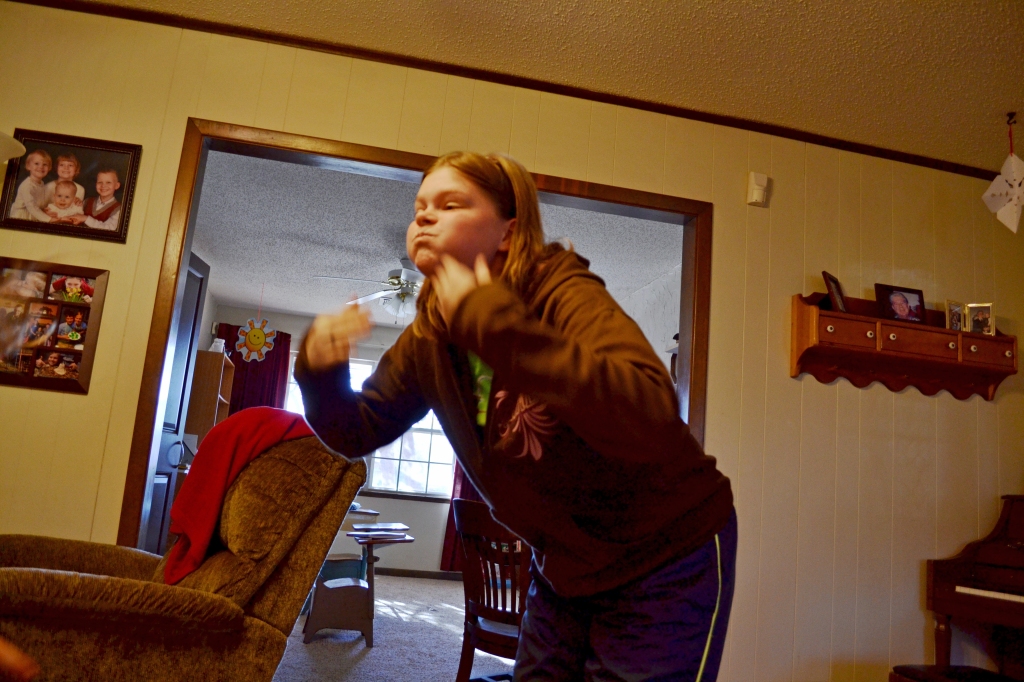 I have no idea what this is. But it’s funny. 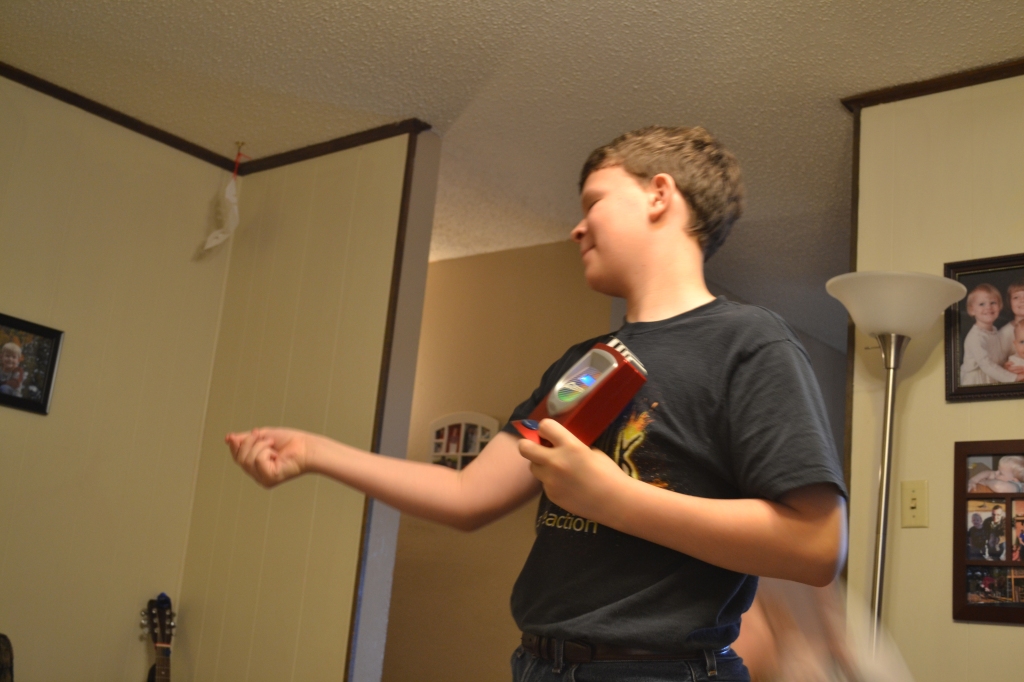 No clue here either. 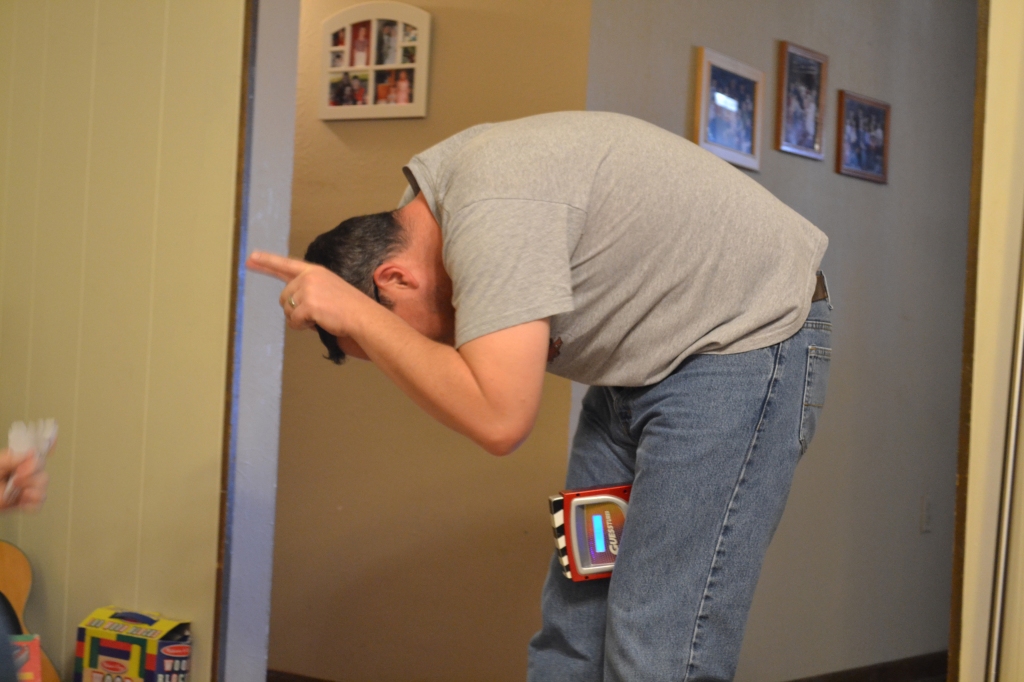 So many thoughts come to mind about how to caption this photo! 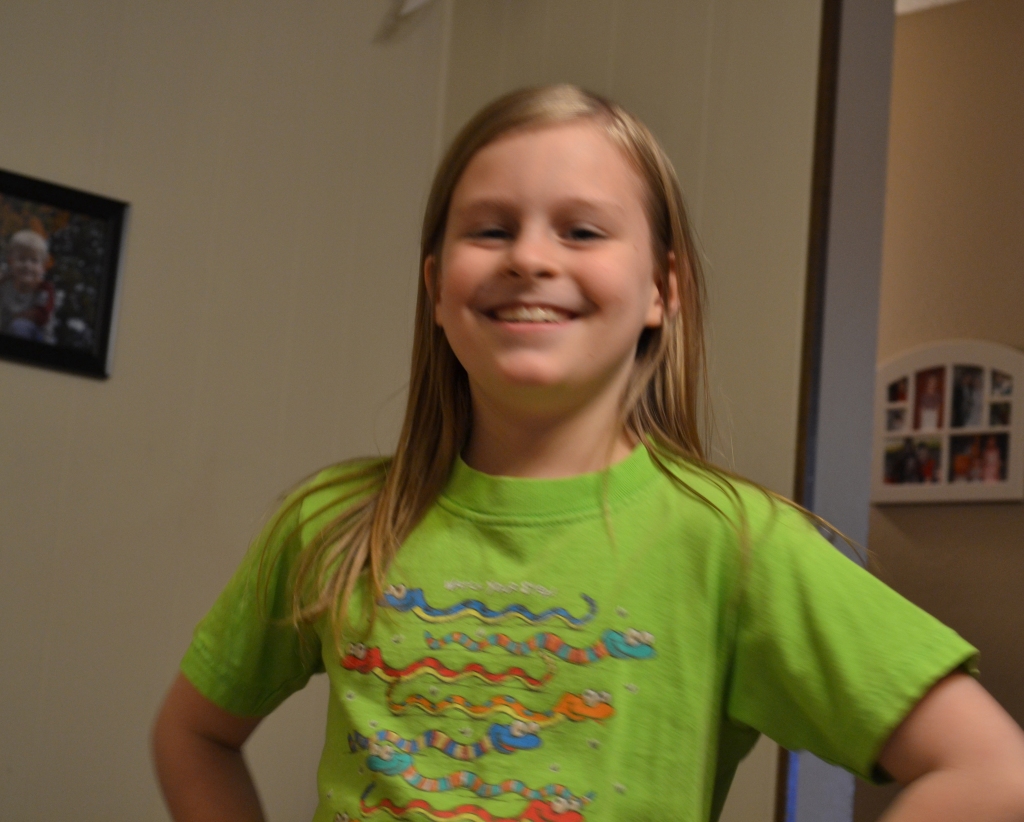 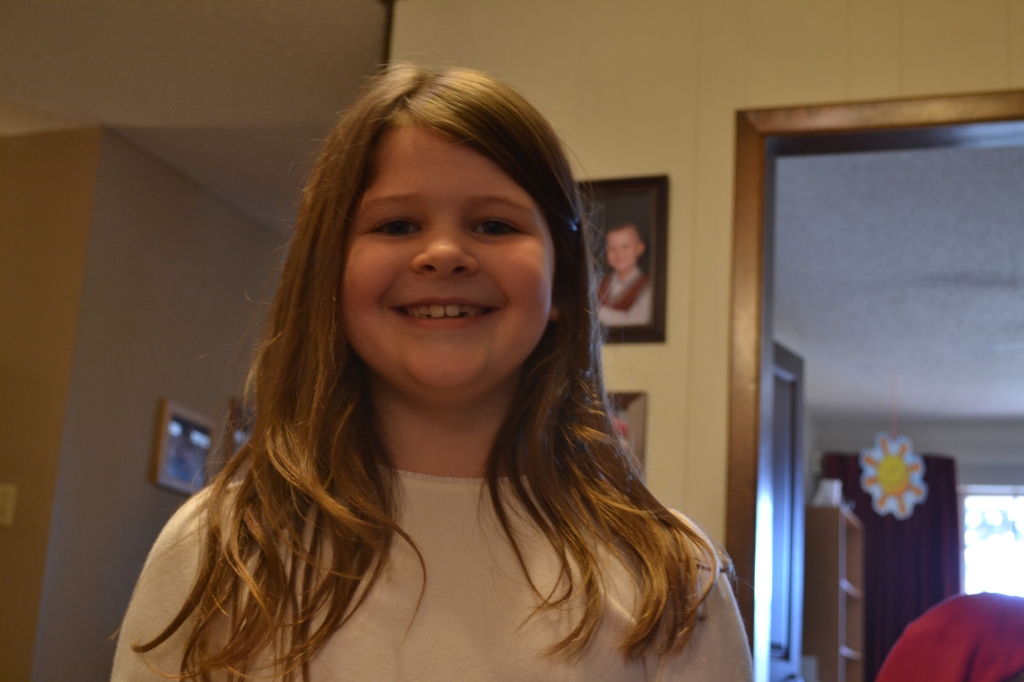 Laci really cracked us up. She’s still a bit too young for the game, but she gave it her best shot. She had to pass on several because she didn’t know what they were. If she started acting out something, she would keep doing the motion, never changing at all, even if none of us were getting it. For example, she pretended to be sprinkling salt out of a shaker, but that wasn’t it. She said, “I know what this is (in other words, she couldn’t pass on it) so you just have to guess it.” Well, we never did. It turned out that she was “garlicking bread”.  On another one, she acted out “moon” by bending over touching her toes, to make a circle. We didn’t get that one, either, but we had some good laughs! She was good at guessing though! 🙂 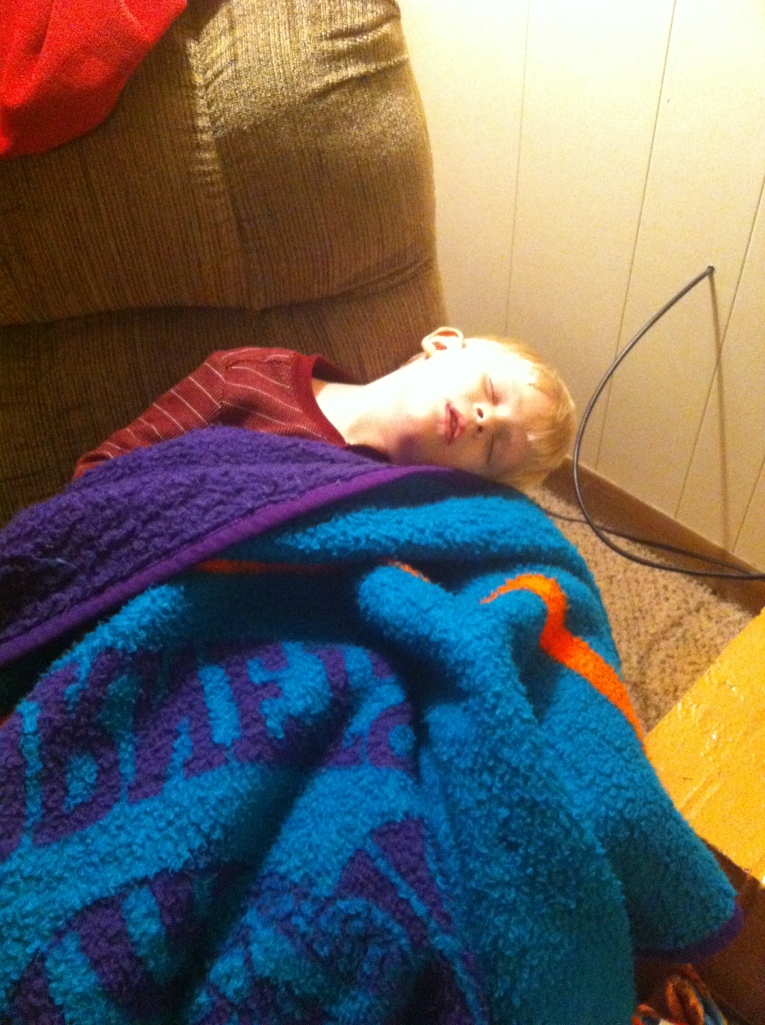 The kids spent the afternoon making ornaments for our tree, which we plan to put up today. After supper (Thanksgiving meal, round two), Matthew passed out. A sure sign of a blessed Thanksgiving.

With a thankful heart,