The horse is prepared against the day of battle: but safety is of the Lord. – Proverbs 21:31

Saturday, October 22, 2016, started out as all Saturdays do for us. We slept late, the kids played and did their weekly chores. I have regular work to do: laundry, ironing, lesson planning, menu-and-grocery-list-making, housework and Sunday school prep. Last week, we were blessed to have Pastor Mark Langley with us from Topeka, Kansas, to preach on Sunday, so we had a few extra things to do for that. I was sitting at my desk working on lesson plans for the coming week when Mitch asked if he could go on a bike ride. He does this almost every day. I said yes. I cautioned him to be careful and told him what time he should be home. I made sure he had Terry’s phone with him, like I always do. I got back to my work. A few minutes later, I heard the blaring of not one, but several sirens. They were close by. But I often hear sirens. Our town has 100,000 people. Sirens are normal, just like the bombing at Ft. Sill. I kept working. A few more minutes passed and I got a phone call from Terry – well, it took me a sec to realize that it wasn’t Terry, Mitch had Terry’s phone. I had already forgotten that Mitch had left for a bike ride. I remembered it was Mitch and figured he’d fallen or his bike chain broke. His first words were, “Mom, calm down.” (Odd. I was calm.) “I’ve been hit by a car.” (Not calm anymore.)

I asked him where he was and he told me the street name. “Next to that brown house,” he said. What brown house? I thought. Finally, “Just drive like you’re going to church and you will find me,” he said. We hopped in the car and did that. Around the corner from our home were two police cars, a fire truck and an ambulance with the stretcher out. No wonder I heard the sirens so loudly…and they were for my own son. Mitch was seated on the curb talking to paramedics. I leapt out of the car and rushed to him. I did my best to remain calm. I’ve been in enough of these type of situations to have learned the hard way that panic never helps, nor do tears. I did feel choked up and misty-eyed as I saw my boy. He was scraped and bruised, clothes torn and asphalt-colored grime all over one side of his body. He complained of wrist pain and scrapes on his arms. The paramedics said they could take him to the ER or we could, but either way, we should have him checked out. We signed a paper releasing the paramedics and loaded him and his bike into the van.

Police explained to Terry on the scene that the driver who hit him had fled. Mitchell came to with a man and woman asking him if he was all right. They helped him out of the road, called 911 and remained on the scene to give police the license plate number of the driver who hit him, as well as the description of the events. Terry and I were so shaken up at the scene, that neither of us had the presence of mind to inquire as to who the witnesses were or if they were there. We would have liked to thank them. We hope to be able to do that when the police complete their investigation. That’s right, it’s an ongoing investigation as they try to find the person who hit Mitchell and left him in the road, unconscious. The witnesses said Mitch went up on the windshield of the car, maybe up over the car, and the driver stopped to let him roll off and then sped away. I am so grateful that there were people who cared enough to get involved, to help a complete stranger. I will be forever grateful to them, and to the rapid response of our police and paramedics.

I have so many emotions flowing through my mind as I write this. Because we had a busy weekend ahead of us, I had to compartmentalize these events and move forward to the next thing. I’m usually the type who pauses to process my emotions, it’s just how I handle life. I cry, usually in private, then I get up and move on. I have not cried, not really. But as I sit down and write about these events, I can feel the tears coming to the surface. All of the “what ifs” come to mind: What if he had died? What if he were in a coma? What if he couldn’t see or walk? And to each of those “what ifs” come a resounding reply from my heart, “Thank you, Heavenly Father!” I am overwhelmed with gratitude for the Lord’s protection. My mother often quoted Proverbs 21:31 to me as I was growing up. Its truth was illustrated to me in living color last week.

Well, we got home and had Mitchell shower and change clothes. He was a bit disoriented and pumped-up on adrenaline at first. In his confusion, he put on the same clothes he had worn in the accident after his shower, so we had him change. He wanted to go out to eat as we had planned to do that night, but now he had to go to the hospital to be examined, so the meal was put on hold. He was unhappy about that. He couldn’t remember the accident and he felt like it was his fault, but we don’t know. We told him it didn’t matter whose fault it was, he was alive and we were so thankful. We decided to take him to the MedExpress Urgent Care Clinic in town and avoid the ER. They took an x-ray of his wrist and told us it was just a bad sprain. They gave him a support splint for it. They said to check him every two hours for the next 24 hours for a concussion by having him stick out his tongue straight, asking him questions like, “when is your birthday?”, having him close his eyes and touch his nose, checking his pupils and things like that. We had a very long night on Saturday checking him. Terry and I took turns waking him through the night.

Needless to say, it has taken me a while to recover from that one day as I have tried to keep going with our normal routine: Co-op on Monday, school work through the week; on Tuesday, we found out Lauren would have her wisdom teeth cut out the very next day – Wednesday! That went well, praise the Lord, but has involved a long recovery process for her. She is still on pain medicine and only eating soft foods.  Yes, it was a long week, but a hugely blessed week.

Here are a few photos of Mitch the day of the accident: 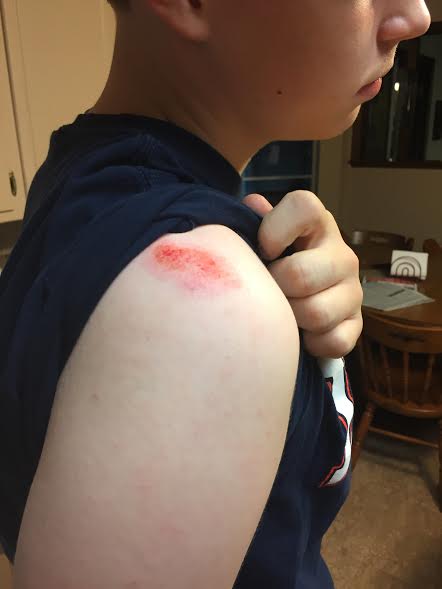 Here he is on Tuesday, October 25: 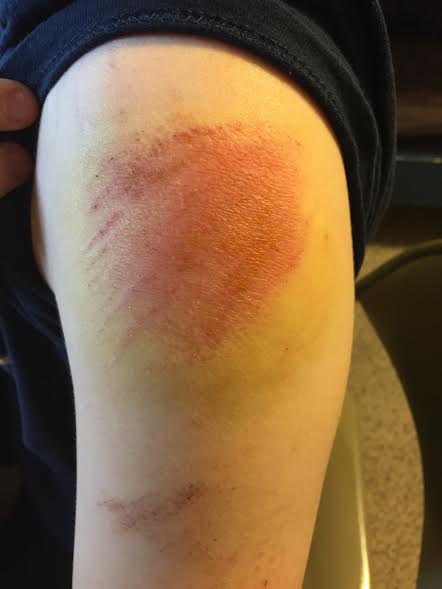 His bruises have continued to heal even more and his black eye is less swollen and dark today. He has more range of motion in his wrist after wearing the support for a week. I knew the pain in his wrist was bad when I didn’t have to make him wear the support. Today is his first day without it; today is one week since the wreck. What a week!

I am thankful that, while I do all that I can to be a good mom and prepare for the worst, ultimately, safety is in the Lord’s hands.

And I trust His hands.

7 thoughts on “Safety is of the Lord”