Laci, age four, is not officially part of our little homeschool. However, that doesn’t stop her from learning during school and beyond! She is constantly listening to us and copying the older kids. She also asks lots of questions!

She loves to organize and sort things. Here’s how she sorted our alphabet cards today — by color! heehee! 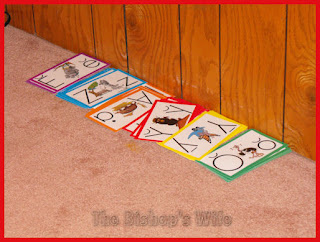 I got this little video of her singing the ABC’s of ACE, the Letter “M”, about “Milton the Mule”. She says “Milton the Mole” when she sings it, and I just love that. 🙂 Leslie does a great job singing these, too, but she’s a bit camera shy. {smile}

The words are:
“Milton the Mule, he made a mistake, while he read the map he walked in the lake. Mmmmmm…”

2 thoughts on “Milton the Mule”