It’s hard to believe that we are halfway through the school year! It has been a busy one. Lauren is doing well with her work. She is not a fan of American History, but has conceded that she enjoys using Notgrass History more than Abeka. She is using Abeka for literature, and even though she’d rather read British lit than American lit, she has found a few stories she likes. Moby Dick  wins the most-hated story so far, but at least it’s in the past. She loved The Scarlet Letter, so that is a bright spot. The Math U See Geometry has been great, and the jury’s still out on the Institute for Excellence in Writing. Basically, if it’s writing, it’s no fun, but I think it’s growing on her. I think.

Lauren is driving alone now. That has been a life adjustment. No more worrying about little ones crawling around getting into the books or starting to put fingers in a light socket, now I’m concerned that they don’t get in a head-on collision! Ah, yes, I’m learning anew to trust in the Lord. It is a great blessing that Lauren is a careful and considerate driver. She lets me know when she arrives somewhere and when she is coming home. It has been so nice for her to drive herself to band practice or to the library.

Mitchell’s nemesis has been science. He is not a fan of the Apologia Physical Science, but at least we’re on the downhill slide now. He is doing well with Math U See Pre Algebra. I’m so glad we made that change in math!

Leslie and Mitch are both enduring the Notgrass History and literature. I am loving it! Each week we read about a historic place, a biography, an event, and a daily life lesson of the time period. After reading the lesson on Crater Lake in Oregon, I’ve added it to my “places to see” list! We do a core lesson together each day, and then they do separate workbook assignments based on that lesson. The literature, which coordinates with the time period we’re studying, has been excellent. It does take a bit longer than it would if they worked independently, but I enjoy doing this together.

Leslie is a hard worker, tackling each task with enthusiasm. She is doing well in all of her work. Her favorite subject is spelling.

Matt is reading, writing, counting to 100, adding, and even telling time to the hour. I was unable to do much pre-school preparation with him, and I was a bit concerned at how he would do. It has been a relief to see that he is learning. Teaching him adds at least an hour of work for me each day, plus more prep each evening, but we are making it happen. He has battled a lot of sickness this past semester, missing six days of school because of it. It has required my adjusting my lesson plans and being flexible, which is not my strength. So, I am learning, too.

Laci is doing great with all of her work, and even enjoying it (most of the time). 😉 She has learned long division and how to find a variable in an equation. She likes Bible reading, spelling, and her literature books. She just completed science for the year (it’s only one semester for 3rd grade using Abeka). She made an animal science notebook as a project. She had to find at least five pictures of the following animals: Mammals, Invertebrates, Fish, Birds, Reptiles and Amphibians. She had to write the characteristics of each category and she also drew several pictures for the notebook.  Here are the photos of her work: 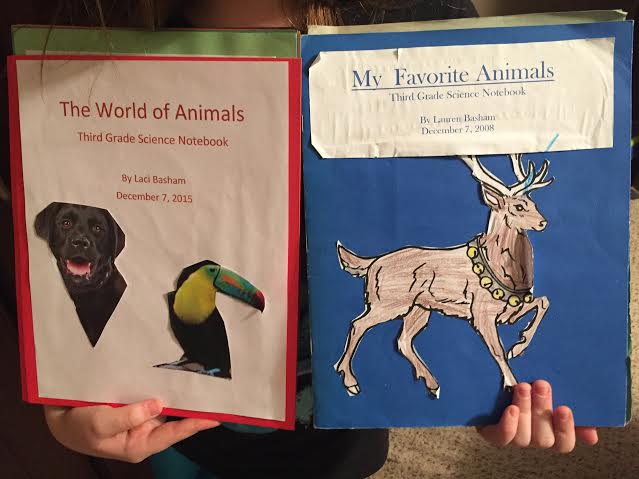 Lauren also made an animal notebook in third grade! Here they are side-by-side. Lauren and Laci both turned their notebooks in on the same day, seven years apart. It was also Laci’s birthday!

We have been busy not only with school, but with church activities, band practice and concerts, piano lessons, basketball and volleyball. I must say I’ve enjoyed this time off for Christmas break. I needed a breather to get ready for the New Year. I look forward to it with great anticipation, for my hope is in the Lord.