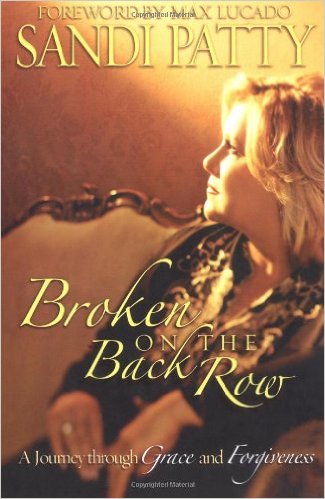 I was a huge fan of Sandi Patty as a young teen. I spent hours lip syncing to her songs and dreaming about singing just like her. However, I must admit, I hadn’t thought about her in ages. When my husband informed me that Ms. Patty would be in our area for a farewell tour, all of those childhood memories came rushing back. “Would you like to go?” he asked.  Of course, my answer was yes!  I am looking forward to hearing her for the first time in person, and I’m even hoping for the chance to meet her.

Thinking about her again, I decided to search for her music online. I found several videos and a few articles. I had forgotten that shortly after the release of her album, Another Time, Another Place, in the early 90’s, her life and career took a turn for the worse. The book Broken on the Back Row written by Sandi, deals with her struggles with fame, marriage, adultery, divorce, her second marriage and her weight. Her story, like all Christians’, begins with brokenness, and ends in sweet redemption.

This is not a book that glamorizes sinful behavior. In fact, I was pleased that there are no gory details of her adultery (other than stating that it happened) or of her disagreements with her ex-husband. Sandi deals with her sin honestly, claiming full responsibility and outlining the steps she took to be forgiven and restored.

I suppose the thing that stood out to me was the fact that after her sin came out to the public, she lost everything. Churches cancelled her concerts, her recording house told her to wait before releasing another album and she was reviled in many Christian publications. She says that this was understandable, and she never resented the price she had to pay for her sin; she deserved it. This attitude gave her a new appreciation for the fans who forgave her and gave her a second chance. But it didn’t happen overnight. She paid (and is still paying) the consequences of her sin.

The book’s message is one of redemption, and that’s the most beautiful story of all.

Sandi’s parents are named Ron and Carolyn – just like my parents! Here is a moving video of Sandi singing with her dad, accompanied by her mother. I hope it blesses you as much as it did me.


If you like Sandi Patty, I think you’ll enjoy reading Broken on the Back Row.

4 thoughts on “My Book Bag: Broken on the Back Row”