Well, I’m finally finishing up my posts about our vacation last month. (Better late than never, right?) 🙂 On our way back from Canada, we stopped by The Farmer Boy home in Malone, New York. We don’t go up to the far North that often, so we tried to do as much as we could while we were there. If you don’t know about this famous home, then you have never met Laura Ingalls Wilder! She’s an amazing person who wrote about her life (in a somewhat fictionalized fashion) in books known as the “Little House” books. The home in New York is the home of her husband, Almanzo Wilder. She writes about his childhood in the book, Farmer Boy. I read every one of these books when I was twelve, but I had forgotten a lot of it! The tour brought back a few memories and piqued my interest – and the kids’ too – to read this book. We finished enjoying it aloud about a week ago. The stories really came alive since we had seen everything she wrote about with our own eyes. We walked down the steep stairs that led from Almanzo’s bedroom to the dining room. We stood in the parlor where he threw a blacking brush at his sister, Eliza Jane. We saw the stalls of Lucy and Starlight. And the stall where he milked Blossom.
The home itself was the original structure, but had been refurbished using materials that were true to that time period. They matched the wall paper and rugs to Laura’s descriptions, which were based on Almanzo’s memories. Our guide told us that Almanzo drew a diagram of his house and the barn for Laura’s book. When the barn was struck by lighting in the 1950’s and burned to the ground, the construction crew in charge of the refurbishing used Almanzo’s drawing to locate the old foundation of the barn. It was just where he said it was. The amazing thing is that Almanzo was 65 years old when he drew the diagram for Laura! Laura never got to see Almanzo’s home for herself, but with Almanzo’s detailed descriptions and her own imagination, I’m sure she knew every nook and cranny.
I wish I could have photographed the inside of the house, but it was forbidden. Inside we saw a replica whip used by Father Wilder, the kind he loaned the school teacher in the book. They had unearthed an old bottle of oven blacking, but were not sure if it was used by the Wilders. They had many other time period replicas which were quite interesting. We saw Mother Wilder’s kitchen and pantry, where she fixed up all those meals Laura described. If you enjoy history, or if you enjoy good literature, I highly recommend the Farmer Boy house as a must-see! 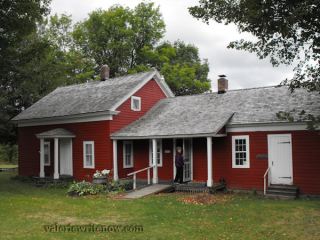 The restored home, with our tour guide, Laurie, going inside.The white door on the far right is the cellar.
I just love the color! The tiny window in the second floor is Father’s workshop, where he let Almanzo help him shave shingles on his birthday. That is also where Almanzo and Royal shared a room, Eliza Jane and Alice had a bedroom and Mother Wilder did her weaving. It was a full house! 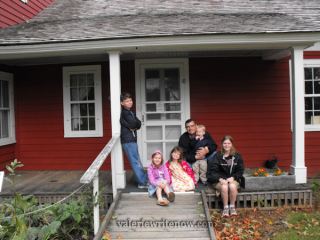 Here’s our family on the front porch. Behind this door is the kitchen. To the right is an entry/storage room. It had a cot for the teacher to sleep on when it was the Wilder’s turn to board him. To the left is the dining room and then Mother and Father’s room, which was very small! 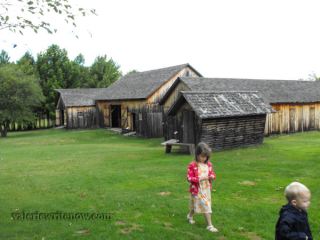 The Wilder barns. The tiny house is the pump house. 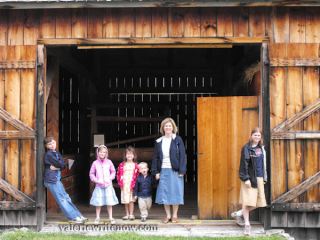 Here we are at the entry to the big barn. 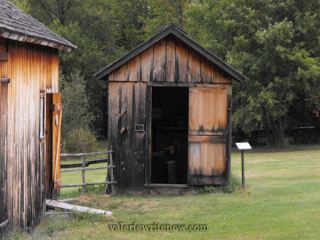 The pump house, where the pump was hard to work! The little rail of wood to the left, between the fence rails, is the tiny trough that fed the water from the pump to the large trough for the animals. It leaked, by the way. Poor Almanzo! 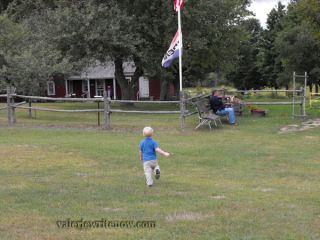 Terry is taking a break and Matthew is running! Probably right where Almanzo used to wrestle with those ornery cousins of his. 😉
We enjoyed our trip through Northern New York very much. It is a lovely part of this great country of ours. But we were all eager to get back to Ohio to see Grandma and Granddad! I don’t know what was wrong with me, I hardly got any pictures in Ohio! Part of the time I was sick with a cold and the other part I was relaxing while my sweet in-laws took care of the kids! 😉 They had a bonfire with their wonderful church people one night we were there. Here are a few photos of the guys getting things ready outside. 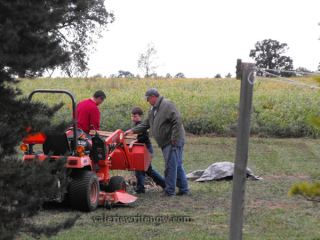 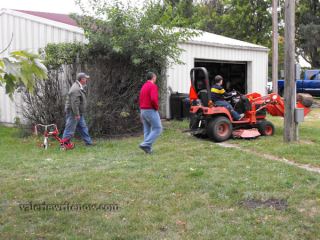 Mitchell enjoyed driving the little tractor – under the watchful care of Dad and Granddad! 🙂
I suppose I should be hogtied for not snapping any photos of my dear Mother-in-law or Terry’s Great Grandma! Or of my friend, Stephanie and her kids! Shame on me. I think I need to just go back up there and get some, don’t you?

4 thoughts on “New York and Ohio”

All images are property of the web author/administrator, Valerie Courtney Basham, or are used with permission via the creative commons license at http://creativecommons.org/licenses/by/2.5/
%d bloggers like this: