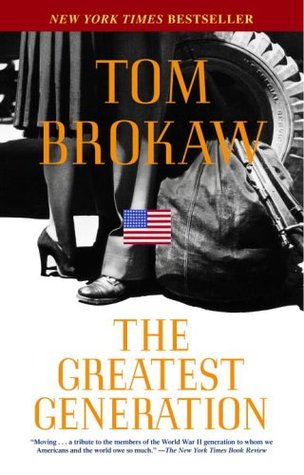 The Greatest Generation by Tom Brokaw has been a book I’ve been meaning to read for ages. As a history lover it intrigued me. I also really like Tom Brokaw, but then, who doesn’t? His unmistakable baritone voice came across the television many an evening at my house as he anchored the news. When Terry and I found a copy of this book at Goodwill, we snatched it up.

This book is broken down into the following sections:

While the headings are different, the theme in each is the same: The depression and World War II generation made incredible sacrifices both before and during the war then came home to live their lives honorably. Many of us would have been surprised at how many heroes we encountered daily at the post office, the super market, the bank, and maybe even next door.

My favorite story in the “Ordinary People” section was that of Dr. Charles Van Gorder. He volunteered to be part of a two-team surgical unit that was part of the D-Day invasion. They set up a medical unit behind Allied lines. When the invasion began, they were inundated with work. Dr. Van Gorder did every type of surgery there was. He says it made him a better doctor – no doubt! I can only imagine the stress and strain this man was under, trying to save the lives of our troops. When he returned home, he started a clinic and hospital in rural Andrews, North Carolina. He wasn’t a fighter, but he helped the cause and risked his own life in the process.

Many of the biographies echoed one another on their frustrations with the current generation. “It’s a little square to say you’re patriotic. I would like to think that if the United States were attacked we’d band together, but I’m not sure,” Claudine Lingelbach says. She served as a WAVE during WWII, delivering classified papers to the War Room at the White House every day. This book was published in 1998, three years before 9/11. I’m afraid her fears were valid. Rather than banding together, we have isolated ourselves more and more through racial sensitivity.

And what about the home? Claudine continues, “What concerns me most about the future is the breakdown of the family. We were willing to make sacrifices so that I could stay home with the children. Now couples both work so they can be more affluent. We would rather delay gratification to ensure that our children had a nice home environment.” Amen to that! I can remember buying all of our Christmas gifts with $100 in gift cards one year. Our meal was the free turkey from my husband’s job. Staying home with the children may not always be easy and comfortable, but giving them that “nice home environment” has been worth it. Incidentally, Claudine ended up living in Lawrence, Kansas, and was an avid Jayhawks fan. I may have passed her at the Hy-Vee when I lived in Lawrence -as of 2014, she was still alive.

I enjoyed reading the story of Mary Louise Roberts Wilson, a nurse who served in Anzio. Six nurses gave their lives while fighting to save the lives of soldiers in Anzio. On February 10, 1944, the battle came very close:

As Mary Louise Roberts supervised several operations underway, German shrapnel started ripping through their surgical tent. She says, “We had patients on the table and we wanted to at least get them off. I said something like, ‘Maybe we can keep going before this gets to be too bad.’ It went on for thirty minutes or so. We just kept on working.” Her superiors were so impressed with her coolness and inspirational personal conduct, they recommended her for the coveted Silver Star. She was the first woman to receive this honor. – p. 177

The book lists too many harrowing and ennobling stories to share here, though I wish I could go on! Some readers may find the “profile” style of the book repetitive and thereby, boring. I did not. I am encouraged by the stories of these fine men and women; indeed, I owe them a great debt.

To paraphrase the words of one man in the book, after going through the horrifying experiences of World War II, a bad day at the office didn’t seem as bad. Their stories have helped me put my troubles in perspective, too.

2 thoughts on “My Book Bag: The Greatest Generation”